Symbolic statue created from the rubble of Beirut explosion 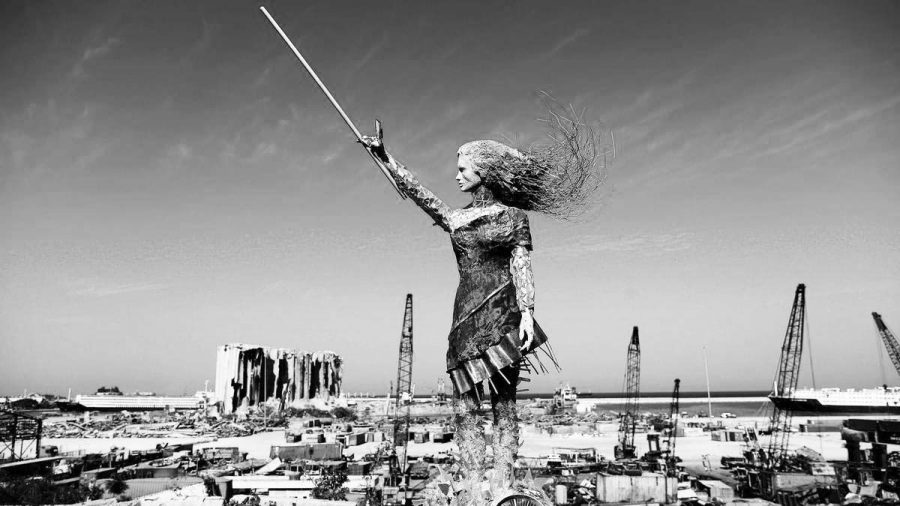 On Aug. 4, a large amount of ammonium nitrate that was stored at the port of Beirut, the capital of Lebanon, exploded.

Since this explosion, the people of Lebanon have come together to support their capital, participating in cleanup efforts, raising money for those that lost everything and returning lost pets to their owners.

Hayat Nazer was among these people, but she wanted to do something more.

“The explosion broke my heart. I was just devastated. I was traumatized, but honestly, all of us in Lebanon are traumatized,” Nazer said.

The explosion was devastating to a country that had already been suffering from political turmoil, economic collapse and a worsening coronavirus outbreak. Participating in the efforts to cleanup Beirut and restore the city to its former glory inspired Nazer to create a statue that she hoped would unite the city and the country.

“I traveled to people’s homes after they were destroyed by the explosion and told them, ‘I just want you to give me anything I can include to make you a part of my sculpture,’” Nazer said. “I was shocked. People gave me such valuable things – things from their childhood, their grandparents who died in the civil war, things they wanted to save for their children. So many emotions went into this.”

And so with the items she collected, Nazer created a statue of a woman with long, flowing hair, raising the flag of Lebanon. At the base of the statue sits a clock frozen on 6:08, the exact time of the explosion.

This is not the first creation Nazer has made to raise awareness of Lebanon’s social and political turmoil. “I suddenly started feeling the need to paint,” Nazer said. “It was a need that I couldn’t stop. I had to quit my job because I felt like I just couldn’t make the change I want to see in the world without focusing on my art.”

Her previous works have included other found object sculptures, as well as graffiti and paintings on canvas.

In 2019, she made a sculpture titled “The Phoenix,” which was made of tents that were broken by counter-protestors during Lebanon’s political upheaval. She has also created a giant heart made of stones and tear gas canisters left over from riots.

Most of her previous works have been destroyed by authorities that don’t take kindly to criticism of the government, and she fears that the same fate will befall her unnamed statue of the woman.

“After an explosion, you can build back homes and buildings, but what you can’t bring back are memories,” Nazer said. “And throughout Lebanon’s history, our government removes anything that reminds us of what has been done to us. That’s what makes this project so special. It’s fighting. We’re raising our voices through art. We’re telling our own stories.”

No matter how long it stands, this statue will remain a symbol of hope for all of Lebanon.