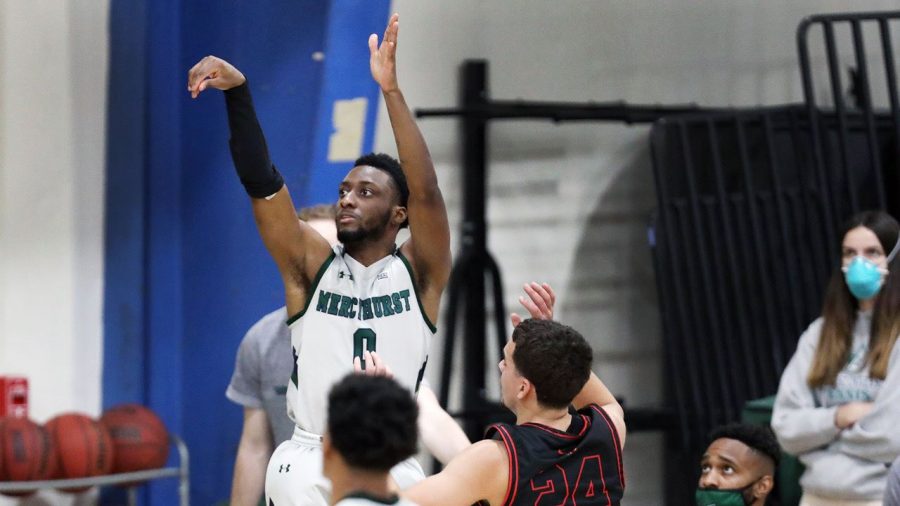 The Men’s basketball team host-ed Clarion University on Feb. 3, taking the win with a score of 91-54. Mercyhurst University now has a record of 7-0.

Mercyhurst came out with a slow start to the game, but they were able to overcome that gap late in the first quarter.

The visiting team showed a strong start, scoring eight in a row after Daniel Ogele scored the first basket. This put Clarion at an 8-2 lead over the Lakers. The Lak-ers then responded with an 11-5 push, tying up the score 13-13.

This rush included three of ju-nior guard MiyKah McIntosh’s four triples during the game. This lead was not good enough to stop Clarion as they came back to tie up the game again 26-26 with eight unanswered baskets.

Eager to get ahead in the game, the Lakers took action and fought back the last six minutes of the first half. With help from Zach McIntire, Melkisedek Moreaux and Steve Cannady the Lakers pushed through their slow start and won the half with a score of 48-29 after a buzzer beater from Cannady.

Going into the final half of the game, the Lakers knew it was im-portant to come out strong and that is just what they did. The Lakers maintained a 20–30-point lead for most of the half besides a small hiccup after Clarion hit a 3 to cut the deficit to 62-43. McIntosh, McIntire, Planutis and Gross all contributed in the last half to come back again with an-other 30-point lead after a basket by McIntosh from Bradley. The Lakers then solidified their win with a score of 91-54.

Another noteworthy achieve-ment of this game was McIntosh’s season high of 25 points. McIn-tosh went 9-12 shooting from the floor, which included a perfect 4-4 for his three-pointers.

McIntosh’s contribution to this game helped the Lakers get this impressive win over Clarion.

“I give all the credit to my team-mates. They trust me to hit shots and know that I get in the gym and get shots up. I get most of my confidence from them,” McIntosh said.

This goes to show the great chemistry the team has put together for this year on the court.

McIntosh is excited for the rest of the season and knows that head coach Gary Manchel will keep the team prepared for their upcoming games, whenever they may be.

“We stay prepared. We have been going hard since we could start practicing last fall, and we haven’t looked back once. We continue to improve every day in practice and in every game,” McIntosh said.

Junior Nicholas Lang was the second leader on the board against Clarion with 13 points and 4 as-sists.

Lang is looking forward to the rest of the season and believes the team’s hard work will allow them to keep seeing similar results like this game.

“I think our chemistry has helped us have such a good start to the season. We returned most of our guys from last season and have been practicing for a while. When we play games, we have a lot of confidence and trust in each other,” Lang said.

The Lakers look to continue their impressive start to the season when they host D’Youville College on Feb. 12 at 5:30pm.