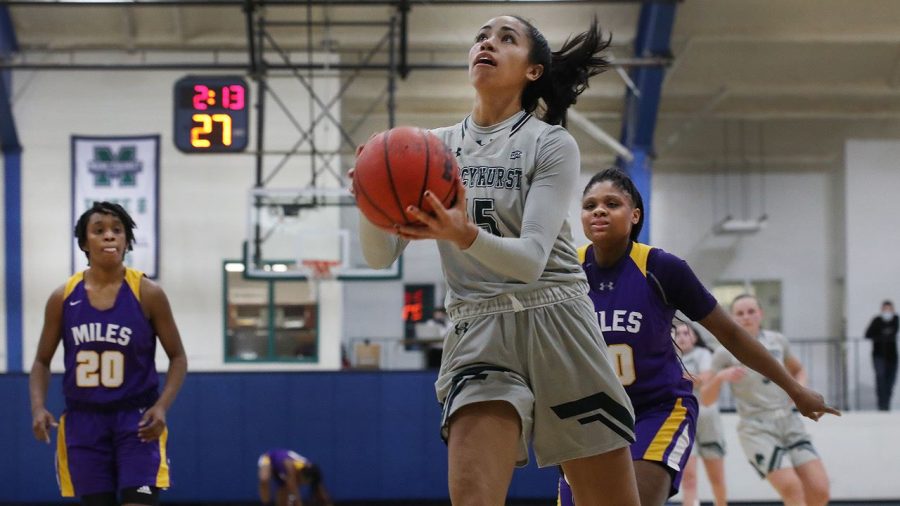 Mercyhurst Women’s basketball achieved an impressive two-game sweep of the College of Saint Rose on Feb. 16 and 17 at the Daniel P. Nolan Gymnasium in the New York state capital. The Lakers beat the Golden Knights 70-54 and 75-52, spoiling the season-opener for Saint Rose.
It was the first time the teams had met since 2001, and it was a key game for the Lakers to show their strengths.
“Since our last loss against D1 Cleveland State, we took the last week to really dive into our losses and learn from them. I really love how this team took that information and applied it to competing on the practice floor, because I think it translated well to our games against St Rose,” head coach Brooklyn Kohlheim, said.
In the Lakers’ first game on Feb. 16 junior Julia Buchman scored a career-high 14 points, while freshman Brittini Martin added a season-high 12. St. Rose began the game by picking up the first points of the contest on a layup, but the Lakers came back with a 5-0 push with scores from Julia Buchman and Nicolette Arnold.
The two sides remained deadlocked at 19-19 in the second quarter until the Lakers embarked on a 10-point run before the beginning of the third and then extended their lead to 50-38.
Meghan Komendarek became the seventh different Laker to score with 8:49 remaining on the clock. Four more Lakers found bottom of the net before it would all be over for the Golden Knights, with Jillian Spano, Jayde Boyd, Komendarek and Martin supplying the rest of the offense for the Green and Blue to secure the 70-54 win.
Komendarek, a senior double majoring in Early Childhood and Special Education was pleased with the team’s performance in the game.
“This season is one that has been unprecedented, but extremely valuable for our team. In regard to our performance, I believe that we showed a great amount of unity as a team,” said Komendarek. “Something that we have placed great emphasis on this season has been our ability to be connected and work together. We have great chemistry on and off the court and when we put it all together, I believe we have the ability to make great things happen.”
On Feb. 17 the Lakers gave an impressive show once again, with four Lakers reaching double digits to complete the two-game sweep of Saint Rose. The Lakers began the game fast with Buchman, Arnold and Grace Centrulla delivering from downtown to hit jumpers that made the game 7-0 with 3:54 gone.
Mercyhurst also scored the first five points of the second quarter thanks to a triple by Komendarek and bucket from Arnold. The Lakers pushed the advantage to 25 three times within the opening three minutes of the final quarter on buckets from Arnold (57-32), Komendarek (59-34) and Boyd (61-36).
Boyd and Centrulla each netted 18 points and combined for 11 rebounds for the Women’s basketball team, while Spano scored their final eight points of the game to secure the 75-52 win.
The Lakers will next play against Clarion and Gannon University.
“The first regional poll came out yesterday and I couldn’t be happier that we aren’t in it. We have played the toughest schedule in the region, but haven’t beaten the teams that matter,” said Kohlheim. “With these last four games in the Clarion and Gannon series, we have got to go 4-0 to get a bid. I think I know this team well enough to know that there are a team that needs and wants to prove something, and that is exactly the opportunity we have in the next two weeks.”
Arnold, a sophomore majoring in Data Science, was left feeling hopeful after the Lakers’ two impressive wins.
“I feel that the past two games against Saint Rose were really great turning points for us. We have been working on a lot of things these past few weeks and I feel like we really showed our growth and accomplished our goals. I’m really excited for the rest of this season because I feel like we are an extremely connected group of people. This is rare on a team and we have some tough games ahead, but we are more than ready,” Arnold said.
“In terms of the rest of the season, our main goal is to win,” said Komendarek. “Given the time we are in with COVID-19, we are simply grateful to even have the ability to play this season. We understand that we have an opportunity that many others have not been given and that is to play games. Our goals are high, and ultimately, we are striving for the top: NCAA tournament champions.”