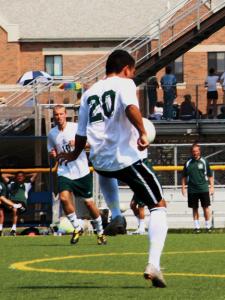 Jill Barrile photo: The men’s soccer team has received significant contributions from a few familiar faces, along with some new ones. Senior Billy Colton, left, leads the team with 10 goals, while freshman Fernando Martinez, right, is third with four goals.A team that is 2-3 in their last five games might be upset about the losses and dwell on them with only three games remaining. Others, look ahead and see the playoffs as a new season altogether.

The latter is the sign of experience and a team that is extremely dangerous come playoff time.

The men’s soccer team fits that description. The team currently sits at 10-4 overall, despite losing three of the last five. The recent stretch is a result of some tough-luck scheduling and rough match-ups.

The Lakers lost back-to-back games to California (Pa.) and East Stroudsburg. The Cal game was a hard-fought 2-1 setback against a ranked opponent, which is currently second in the Pennsylvania State Athletic Conference (PSAC) and first in the Atlantic region.

The East Stroudsburg loss three days later could be chalked up to fatigue or overlooking an opponent. The Mercyhurst game was the biggest win on East Stroudsburg’s schedule, with only four wins on the season.

The Lakers bounced back with two straight wins in conference play. Then, the Lakers lost to top-ranked Millersville. The team was playing its second game in as many days.

White and the Lakers are confident going forward with three games left and currently sitting second in the Atlantic region. The top four teams in the region head on to the NCAA tournament.

“We know what we have to do. We are in the hunt for the playoffs,” White said.

The Lakers only have three games left, and they are all on the road. But this isn’t a concern for White.

“Sometimes on the road it’s easier to play if you are focused and ready for it,” White said. “The other team has to come to us.”

Hopefully, this holds true and the Lakers can finish off the season with three straight victories.

“If we play up to 100 percent, then I believe we can win,” White said.
The biggest game remaining on the schedule is Lock Haven, who is tied with the Lakers in the PSAC.

“The next game is the toughest game to us,” White said.

Meaning the team is focused on St. Thomas Aquinas, when they play on Oct. 19.

The Lakers control their fate with regards to the NCAA tournament. If they win their final three games, they should be in. But just getting to the tournament is not enough.

“Last year we went in as the number one and got picked off in the first round,” White said.

The Lakers are focused on finishing these last three games strong. For them, the real season begins after they face Gannon on Oct. 29.