Tony Bennett croons with the stars in 'Duets II' 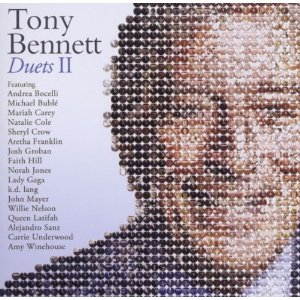 His latest offering is the second album of his featuring various collaborations with other musical figures.

“Duets II” showcases 17 tracks with different big-name artists.
It should be noted that few, if any, of the renditions compare to the Sinatra versions.

The Chairman’s phrasing, intonation and mellifluous voice just cannot be surpassed. This, however, does not take away from Bennett’s talent at all.

The best track far and away is “The Lady is a Tramp” featuring Lady Gaga. She steps out of her usual cotton candy pop music mold and really shows off her talent.

The song has enormous swing and bravado from the opening “She gets hungry for dinner at 8” to the last “That’s why this chick is a tramp.”

Gaga and Bennett even throw in a few new lyrics midway through the song that vary from the original version. This, plus the playful interaction between the two artists, makes for an extremely enjoyable listen.

Following right on Gaga’s heels, is John Mayer’s cameo, performing a rendition of “One for My Baby” with Bennett. This track is substantially “bluesified,” yet it fits the song well. The lyrics allow for the mellow, coffeehouse feel that Mayer gives off.

Yet another incredible collaboration is “Don’t Get Around Much Anymore” with Michael Buble. Both crooners feed off each other, giving the song an incredible amount of energy.

Put simply, the song really kicks. If anyone is the perfect complement to Bennett’s old-swinging swagger, it is Buble.

While the rest of the tracks are solid, the biggest disappointment was definitely “The Way You Look Tonight” with Faith Hill.

One of the best songs of all time was literally ruined. Hill brings absolutely no emotion, energy or romance that the song demands. The attempt to be breathily charming comes off as forced and schmaltzy.

Hill and Bennett do not even come close to doing the song justice.

“Duets II” is a solid work from one of music’s greatest artists. Bennett’s crooning works well with contemporary artists and puts a fresh spin on old songs.

The album is surely worth a good listen while sitting back and relaxing.