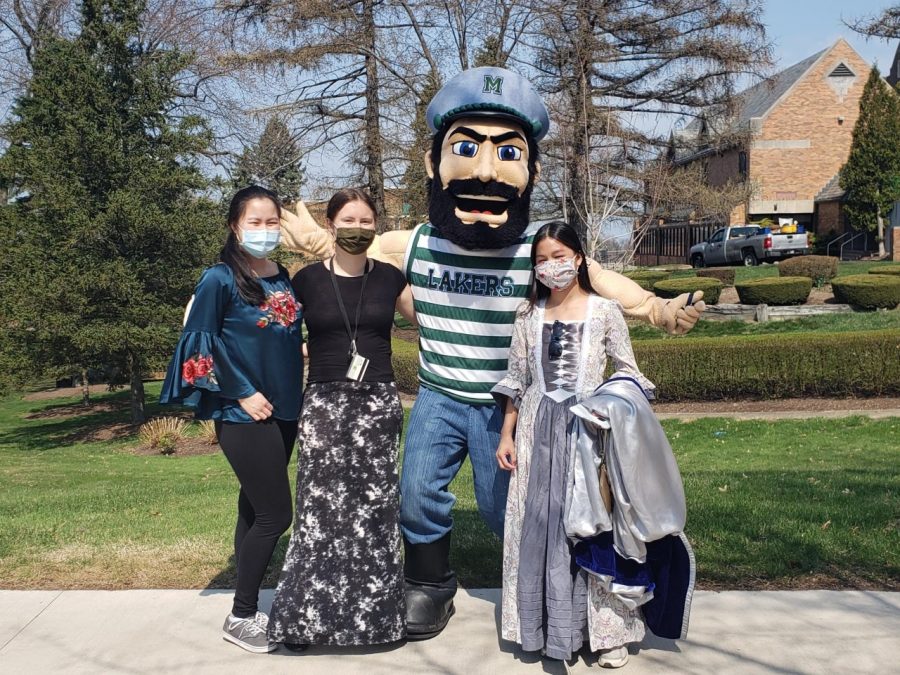 From the Tabletop Games Club to the Anime Club, the Video Game Club to the Pokémon Go Club, there are various clubs on campus for students with all sorts of interests. Of these unique clubs that students are welcome to join is the Society for Creative Anachronism Medieval Renaissance Club.

While the Renaissance Club is fairly new to Mercyhurst, the Society for Creative Anachronism has actually been around for much longer. Amanda Mulder, the advisor of the club, has been a member of SCA for 19 years. When she was a Mercyhurst student, Mulder ran a similar club and specialized in Renaissance dance,commedia dell’arte theater and Italian Renaissance costuming.

“I encourage people to come if they are passionate about medieval or Renaissance history, dancing, clothing or art,” Helena Sturdevant, a junior Art Therapy major and co-president of the Renaissance Club, said.

The other co-president of the club is Marina Collins, a senior Human Resource Management major, who also encourages anyone who is interested in the Renaissance to check out this club.“This RSCO is devoted to the research and recreation of pre-seventeenth century skills, arts and culture at Mercyhurst,” said Mulder. “Members in this club will learn about history through research, project-based learning activities and historical recreation. We are connected with the Society for Creative Anachronism (SCA), which is an inclusive worldwide community of individuals pursuing research and recreation of pre-seventeenth century skills, arts, combat and culture to learn, recreate history and have fun.

”While the Renaissance Club began their meetings over Zoom, they have since transitioned to Hirt L103, where they meet every other Sunday from 8-10 p.m., unless the group has a special guest or a workshop. The club has a lot of hope that they can expand their activities in the coming semesters. “The Wellness Week dance on campus was a special event,” said Sturdevant. “We hope next year we can have holiday parties. Maybe next year we can have a Halloween theme or Christmas party.”

The Renaissance Club has brought in a good group of students who all share a love of Renaissance history. Nathaniel Landon, a freshman Chemistry major, joined the club because he has expressed interest in the medieval age and wants to learn more about forgotten skills from the time.“I joined the Renaissance Club because I love learning about Medieval History and the romanticized modern version that can be found at Renaissance fairs,” said Olivia Turner-Leftwich, a freshman dance major. “My favorite thing we have done is learn Renaissance dances, but I am looking forward to just learning and joking more about these times.”The club is always looking for new members. The club centers around unique aspects of the Renaissance era and welcomes any Mercyhurst students. “I am so excited for the future of this club. I am hopeful for the fall and the coming semesters for this club. We [the board] hope to plan many fun events in the future with hopes of drawing more members in,” Collins said.

The club is enthusiastic about the upcoming semester and is eager to get this newer and niche club on its feet. This club is unlike any other on campus. If you’re interested in learning about the customs that surround the Renaissance era, be sure to check out the Renaissance Club soon!