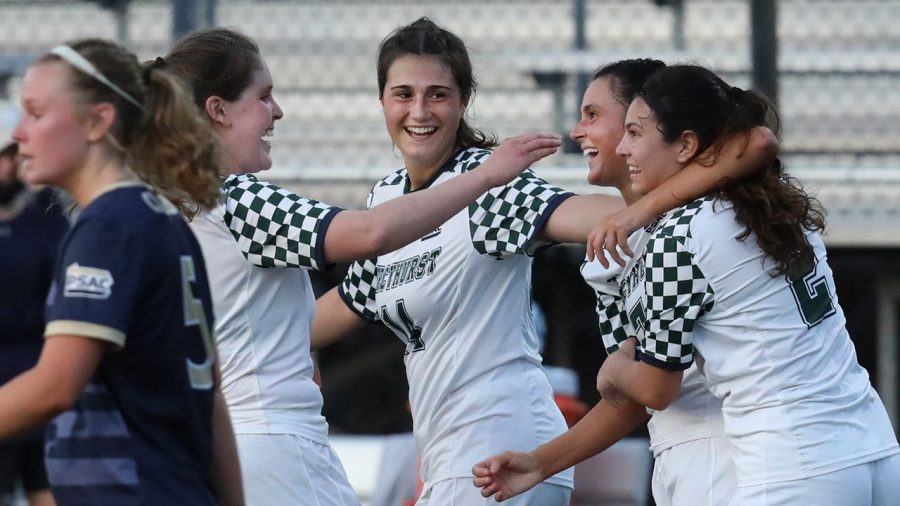 The Mercyhurst Women’s soccer team kicked off their season with a matchup against Clarion University at Saxon Stadium on April 7, and it looks like the lady Lakers are off on the right foot for their highly anticipated 2021 season. The Lakers made their Senior Night a shut out by scoring four goals and blocking all Clarion attempts on the net.

Since 2008, the Lakers and the Golden Eagles have faced off every year for 12 consecutive years. However, this past year, due to COVID, the two teams did not meet on the pitch.

512 days have passed since the Mercyhurst Women’s soccer team has taken the field. The team was finally able to play their first competitive match in over a year and a half on April 7.

“We’re playing some tough teams this spring and we’ve been working really hard so we’re definitely up for the challenge,” senior co-captain Claire Ritzmann said.

The Laker action started with sophomore midfielder Amber Thomas putting the ball right over the crossbar just 12 minutes into the game. Freshman goalie Maddie Elbro started her first collegiate game with her first save in the 24th minute of the first half. Elbro managed to skillfully block
a Clarion deep shot outside of the 18-yard box.

The Lakers were able to put their first goal on the board 29 minutes into the game. The goal came from junior forward Lizzie Ross and was assisted by a corner kick from senior midfielder Emma Scali.

Mercyhurst continued to dominate Clarion by scoring again 38 minutes into the action. Sophomore midfielder Jenna Robnett was able to score off a well-placed assist from sophomore defensive player Sydney Snyder.

Mercyhurst scored their third goal immediately after their second. This goal was made by freshman midfielder Chloe Kalina off a pass to her from a corner kick by sophomore midfielder Madison Hoover. This was Kalina’s first goal in her first collegiate game.

Kalina spoke to her excitement for the moment. “Honestly, at first the excitement was just like any other goal but then I turned around and saw my teammates and then I realized it was my first collegiate goal and that made it so much more exciting,” Kalina said.

Mercyhurst received impressive contributions by both freshman Kaitlyn Low and sophomore Ali Bakowski in the net. As a result, the Lakers were able to keep the Clarion Golden Eagles off the scoreboard for the entire game.

The Lakers locked down their shutout by scoring a fourth and final goal by sophomore forward Alyssa Otto. Otto accomplished this by pushing a penalty shot past the Clarion goalkeeper and securing the victory for the Lakers. Otto was the leading scorer in 2019, holding the most scored goals in the last full season.

The season opener for the team was also celebrated as Senior Night, a tradition that celebrates the graduating athletes on the team. The celebration this year recognized the three seniors on the team: Ciara Cornacchia, Emma Scali and Claire Ritzmann.

Senior Claire Ritzmann spoke to what the team has meant to her this year. “It’s meant a lot to me. It has given me a sense of normality during these tough times. I’ve made most of my friends from my four years here by being on the team. The girls, past and present, have given me a reason to keep fighting and playing the sport I love. I’ve made lifelong friendships and memories to last me forever,” Ritzmann said.

The next matchup for the Mercyhurst Women’s soccer team will be against Daemen College. The kickoff time is 5:30 p.m. at the Mercyhurst Soccer Field.