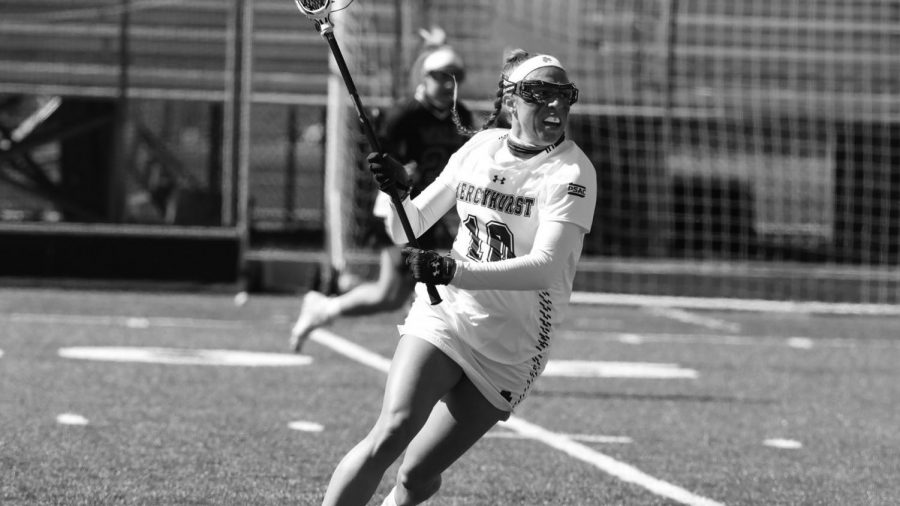 On Tuesday, April 6 the Mercyhurst Women’s lacrosse team, currently ranked 25th in the nation, played their crosstown rival Gan- non University at Saxon Stadium in the PA State Athletic Conference West division action. There were 72 individuals in attendance, cheering the Mercyhurst women’s team on to victory.

The Lakers were able to take the win with a final score of 17- 6. Throughout the game, ten different players on the Mercyhurst team were able to score against the Golden Knights. Julia Rescott, senior attacker, led the team in goals with four.

The Mercyhurst team came out with a strong offense, with both Payton Cook and Rescott recording shots on net within the first 90 seconds. While neither shot was successful, the first goal of the game was soon made by Rescott.

Goals were also soon contributed by both Marissa Comerate and Cook, increasing the score to 3-0 with 23:25 left in the first half. The Lakers received an advantage for some time during the late first half, receiving a player-up opportunity when a yellow card was given to a Gannon Knight. Mercyhurst was able to take advantage of the situation, as Rescott scored another three goals and Paige Cocina contributed two herself, ending the half with a lead of 8-2.

The Lakers kept their momentum into the second half, led by junior attacker Rachel Hirst scoring in the first 29 seconds, making it a 9-2 game. Hirst quickly netted her second goal soon after, followed by goals from both Julia Ruscio and Torie Sullivan.

The Lakers held a strong 12-3 lead with 22:34 left in the second half. Cocina was able to net a hat trick as she scored two more goals. The score quickly became 16-4 as Sarah Kaska and Sara Simms also each added to the board. Lauren Cain netted the final goal for the Lakers at the 23:19 mark, making the final score 17-6.

The Mercyhurst Women’s Lacrosse team also won their most recent matchup with Slippery Rock this past weekend. The Lakers play their next game on Saturday, April 17 at 3 p.m. against Seton Hill University.