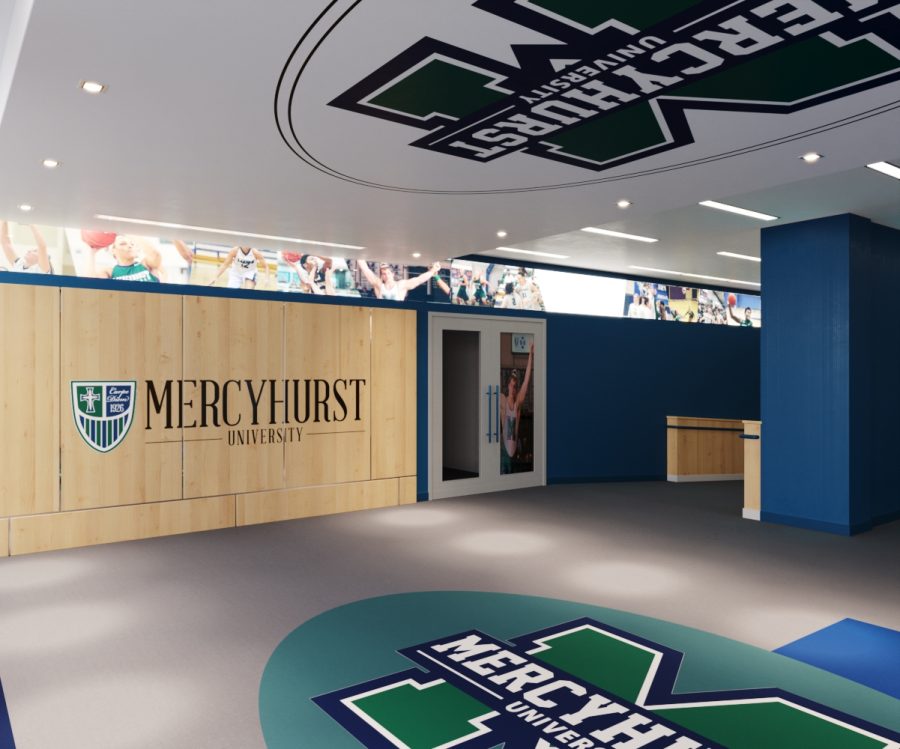 The Laker for Life campaign, which began more than two years ago, has raised $10 million to transform athletic areas. The campaign, which had an original goal of $9.5 million, will exceed that goal by $500,000. The Mercyhurst Athletic Department will renovate all competition facilities in just three years.
This year’s project is a remodel of the MAC, holding the basket-ball court, volleyball court and wrestling arena, to be named the Owen J. McCormick Court.
Saxon Stadium, Tullio Field and the hockey rink were refurbished last year, along with new locker rooms for Women’s soccer and softball.
The stage will disappear, and the court will turn 90 degrees facing north to south. The remodel will also feature a new lobby and Hall of Fame, updated scoreboards and better seating with chair backs. Construction began Monday, April 12 and will end mid-August.
Bradley Davis, Director of Athletics, said with this project the MAC “will become one of the best competition venues in our region,” or essentially, a DI facility in a DII setting.
Main sponsors of the Laker for Life campaign include Betsy and Bill Vorsheck who donated the largest sum in Mercyhurst history. John and Patty Saxon and local businessman Owen McCormick also contributed significant amounts to make the project possible.
Both basketball coaches commented on how excited they are for the facility. Women’s basketball coach Brooklyn Kohlheim is happy to have a facility that “matches the rest of a gorgeous campus.” Men’s basketball coach Gary Manchel said he wants his team to play home games that are “worthy of the faith and vision of this new facility.”
Along with the McCormick Court, all Sports Medicine classrooms will receive a complete makeover. Such actions will benefit the Sports Medicine academic program, and also be helpful for the Athletic Training master’s program that will begin at Mercyhurst in the fall.
Another project for the fall semester is a partnership with Mercyhurst Prep. High School, to construct a turf practice field/softball field on the hill above the other Mercyhurst fields. Work on that project had been suspended because of the COVID-19 pandemic.
The softball team will be able to train and compete at home rather than at Hillsdale Park off-campus, and Mercyhurst Prep. High school students will be able to train on a field rather than the schoolyard.
Davis said coaches and student-athletes are thrilled with the campaign and being the first to compete in brand new facilities.
After a year without athletics, Mercyhurst athletes are eager to play sports once again. The Athletic Department gives athletes a chance to literally start new with these renovations. A tough year will end with needed changes that leave faculty, students and coaches excited for the future of athletics.
Mercyhurst boasts a large student-athlete ratio which attracts donors like those who contributed to the Laker for Life campaign. These funds go into projects such as new facilities which in turn attract future athletes. Improved athletics contributes to making Mercyhurst a sought-after DII school.
Davis and director of Athletic Communications, Craig Butler, have worked diligently to create publicity for these projects, and we look forward to seeing the finished results.