Kelly was invited by the Mercyhurst Center for Applied Politics (MCAP) to its Public Affairs Forum. 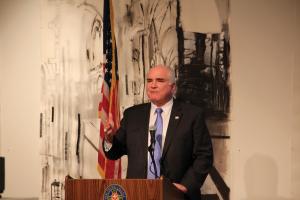 Director of the Public Affairs Forum Brian Ripley, Ph.D., said, “I believe a respectful, open-minded exchange of political views is essential for the health of our political system, and we hope to model that kind of civility whenever we invite a speaker to our campus.”

Kelly is in his first term and is a Republican from the Third District of Pennsylvania. He serves on three committees and numerous sub-committees. The three committees are Oversight and Government Reform, Education and the Workforce and Foreign Affairs.

“I was delighted Congressman Kelly accepted our invitation and chose to make Mercyhurst one of his visits in the district,” Ripley said.

Kelly also presented some information about the debt and offered a small quiz about the government.

“I went to Congressman Mike Kelly’s talk because I thought it would be interesting to see a point of view different than mine,” Javed said.

Lombardo added, “People were well researched and came in to the town hall with knowledge so they wouldn’t simply just buy everything Kelly was saying.”

Ripley was also impressed with the students who attended the forum.

“I was proud with the quality of questions asked by our students: well-informed, penetrating and articulate,” said Ripley. “It was a good example of what politics can and should be about.”

There was also disappointment among some of the students at the event.

“While I thought it was good the congressman came to listen to students’ concerns, I also thought he answered many of the questions in generalities and gave only his own opinion,” Lombardo said. “Like any politician, he cited facts that could be taken in many other contexts and used them to support his ideas.”