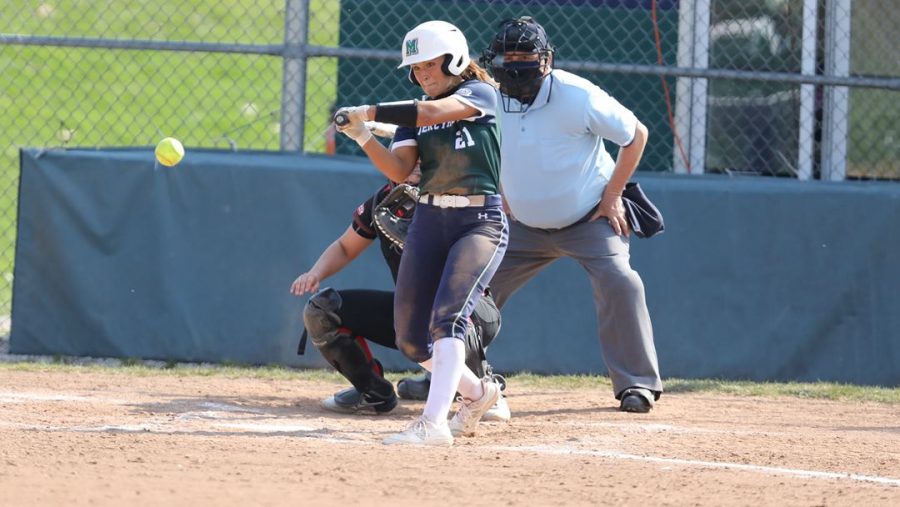 Cheyenne Hindman No.21 batting while playing during the doubleheader.

The Mercyhurst women’s softball team traveled to Johnstown, PA on Sunday April 18th, in order to take on the Pitt-Johnstown Mountain Cats in a nonconference double header. The first game started at noon with the Mountain Cats jumping out to a 1-0 lead in the bottom of the first inning.
The Lakers started out hot in their first game however, by tying the game with an RBI single in the top of the second from junior Chloe McQuestion. It was still a very competitive game going into the third inning, when Cheyenne Hindman hit a two-run home run to give Mercyhurst their first lead of the day. The Mountain Cats then took a 4-3 lead in the bottom of the inning after putting three runs on the board.
Chloe McQuestion came up clutch again in the fourth inning by tying the game on a fielder’s choice. Madison Fry gave the Lakers the lead again in the fourth when she hit a two-run triple to make it 6-4. Mercyhurst extended their lead in the seventh inning with Cheyenne Hindman hitting a solo home run and Sarah Koscho hitting a three run one.
The Lakers would go on to win the first game easily with a score of 10-4. Redshirt junior, Kaitlin Hoffner, moved to 4-2 on the season while picking up three strikeouts. Morgan Hilty and Mikaela Schramski also pitched well aiding in the winning effort. Morgan Hilty was the given the save to make it her second on the season. Cheyenne Hindman led the way on offense going 3-4 with 3 RBIs while also picking up 2 runs. It was a team effort as Madison Fry also hit well, going 2-4 with 2 RBIs while Marisa Cartellone and Natalie Graff both went 2-4. Jessica Clark and Chloe McQuestion were each able to steal one base in the win.
The second game was slated to start out at 2:00 and it looked good early for the Lakers. Mercyhurst picked up 2 runs in first inning which led to an early 2-0 lead. The runs came from an Allison Dejidas RBI groundout and a Marisa Cartellone single. Unfortunately, this is all the offense that Mercyhurst would be able to generate in the second game.
The Mountain Cats cut the score from 2-0 to 2-1 in the fourth inning. It would then set the final score of 4-2 in the fifth inning by adding three runs. Cheyenne Hindman unfortunately picked up the loss for the Lakers and moves to 2-4 on the season. Madison Fry went 1-3 in the second game while scoring a run while Allison Dejidas went 1-3 and had 1 RBI for the Lakers.
Brianne Egelston went 1-4 while scoring a run and Cheyenne Hindman also went 1-3. Sarah Koscho was able to pick a stolen base in the effort as well. This win and loss would move the Mercyhurst softball team to 12-12 on the season. Mercyhurst will take on an away doubleheader at Seton Hill University on Friday, April 23.