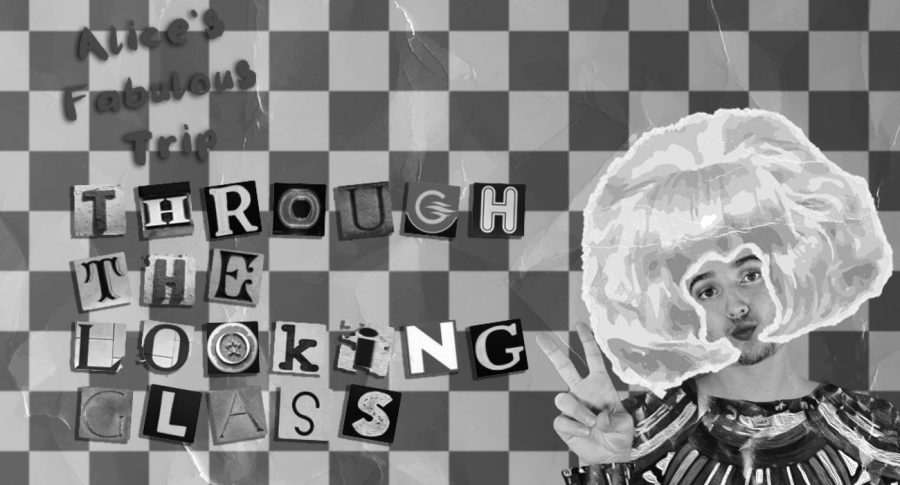 Student Braden Rosciszewski as Alice in “Alice’s Fabulous Trip Through the Looking Glass.”

From April 9-11 the Mercyhurst Theater Program showcased “Through the Looking Glass,” an hour long Zoom-adapted version of “Alice In Wonderland.”
There were a number of things that were unique about this show, besides the fact that it was on Zoom. First of all, the color was able to be edited to black and white, so it had an old-timey look to the parts of the production that utilized this effect. Secondly, the all-too-familiar Zoom squares were reformatted so that everyone looked close together, even though they were not. This gave a sense of relationship to each of the characters.
Most impressively, there were detailed and intricate animated backgrounds that changed with the scenes in order to set the “stage” for the show. These were well-embedded into the production, so they were not choppy and scattered like the typical Zoom background used normally. Rather, they resembled the backdrops of a traditionally-staged performance – with some enhancement.
At certain points, the backgrounds were animated to lend the illusion of movement even though the actors were limited to their squares. This gave the experience a much less restricted feeling. Another way in which “Through the Looking Glass” broke tradition was that Alice was played by Braden Rosciszewski. Rosciszewski donned a puffed up drag wig, make up and a sequined outfit to absolutely own the role of Alice.
Rosciszewski played Alice as simultaneously ditzy and intelligent. The intelligence peeked through in her ability to solve all of the riddles given by the other characters, who were all driven mad with boredom. This contrast worked well in the chaos of Wonderland.
Similarly, the Red Queen was played by Jon Reddinger. The two bantered back and forth when Alice would regularly be sent to the Queen on her journey to return home and avoid the infamous Jabberwocky.
During Alice’s journey through the looking glass, she regularly encountered strange creatures such as singing flower, Tweedledee and Tweedledum, a hare, a unicorn, a lion and more. Each of these encounters were uniquely rendered with the Zoom programming.
The small details, such as the extra sound effects, music, motifs in the editing and the accents and gestures used by the cast made this show stand out. It cannot be easy to be entertaining and engaging when there is no visible audience, but these skilled performers were able to succeed at such a feat.
Although one would expect a Zoom show to be perhaps unengaging – especially considering the sheer amount of time we have all spent on Zoom in the last year – “Through the Looking Glass” was expertly rendered and truly worth the short hour it took to enjoy it.