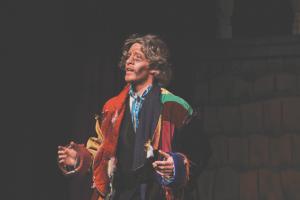 Jill Barrile photoThis weekend the Mercyhurst Theatre Program presented “Oliver!” the musical. A well-known novel by Charles Dickens with music by Lionel Bart, it is the perfect entertainment for the whole family.

There was an excellent turn-out with audience members of all ages. The impressive cast included young children and Mercyhurst students acting together on the stage of the Taylor Little Theatre.

The children in the cast were excellent for being so young–-some looked as young as five or six. They knew where to go, what to say or sing and were convincing yet adorable orphans.

Ethan Craig, 13, played the role of Oliver. He did not look at all nervous or uncomfortable on the stage. He is no rookie to stage productions–he has appeared in many Erie Playhouse productions such as “The Music Man,” “The Secret Garden” and “Tom Sawyer.”

As Oliver he was convincing and made those watching sympathize with the poor orphan. In his song, “Where is Love?” you could see the sadness and longing in his face as he wished for a companion and a home.

Even though Dickens’ story of an orphan may not seem like a family-oriented show, the Mercyhurst Theatre Program made it work well.

Certain elements such as the relationship between Mr. Bumble and the Widow Corney, the orphanage caretakers, or the actions of The Artful Dodger made for a humorous side to the tragic tale.

The music was memorable and catchy. Both of the songs “Consider Yourself” and the heartfelt “As Long as He Needs Me” stuck with me after the show.

In the Friday evening and Saturday matinee cast, Rebecka Bani Kerr played Nancy, the troubled yet kind barmaid who helps Oliver find his way to his rightful home even though it ultimately leads to her demise.

As the role of Nancy’s villainous boyfriend Bill Sykes, Matthew Tolbert was daunting and ominous, and his voice projected through the theatre in his song called “My Name.”

Katie Cecchetti had a clear singing voice and believable acting abilities as the role of the giddy Widow Corney.

The Artful Dodger, a likeable yet sneaky character, was played by Kristian Hill. He was eager and full of a sort of mysterious kindness. Initially Oliver is not sure whether to trust him or avoid him.

The plot twist in the second act creates a suspenseful atmosphere. As it turned out, Oliver’s long lost family member, Mr. Brownlow (played by Barry McAndrew), realizes Oliver is his grandson after seeing a locket that belonged to his daughter who died during childbirth.

Oliver is eventually reunited with his grandfather and is taken to a loving and safe home.

Sophomore Emily Reed said of the show, “I thought it was a wonderful display of the talent found not only here at Mercyhurst but also in the Erie community.”

All in all, “Oliver!” was a wonderful production, showcasing the singing and acting abilities of many students and community members.