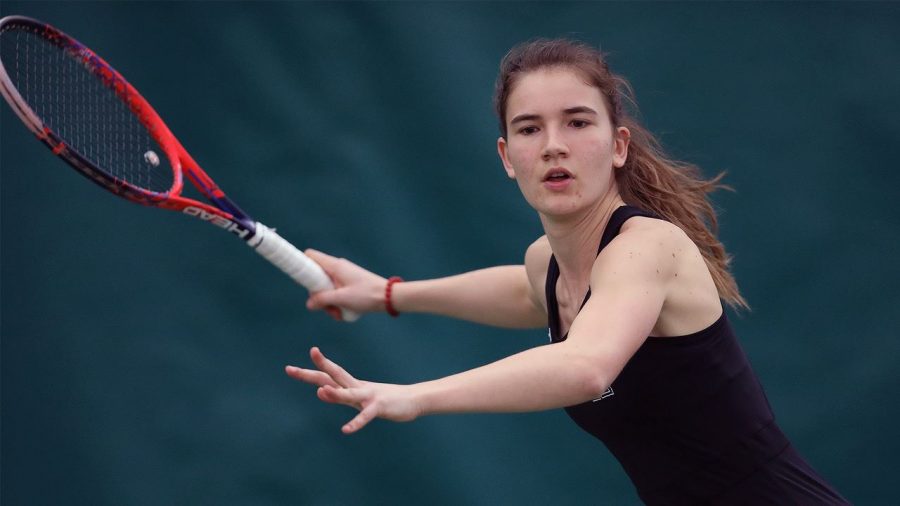 On April 16, the Mercyhurst Women’s tennis team faced Edinboro University for the fifth Pennsylvania State Athletic Conference (PSAC) game of the season. The match started at 3 p.m. at the Westwood Racquet Club in Erie, PA at one of their indoor courts.
Originally set to be played at McDowell High School, the game was moved due to the weather.
Picking up another victory for their PSAC season, the Mercyhurst Lakers took home a 5-2 win over the Edinboro University Fighting Scots.
The Lakers got a quick start to the first set with a sweep of the doubles play. Freshman Valentine Budin and sophomore Janiece Theodora scored the first victory with a 6-1 win over Edinboro’s sophomore Lauren Chiacchia and freshman Emily Cevera at number three.
“Janice and I stayed very focused on our goal while having fun and playing the tennis we love,” said Budin.
Mercyhurst junior Naomi Jahr and sophomore Alana Lewis both earned doubles point with a 6-4 decision over the Fighting Scots’ Marina Zottele and Ana Nadai.
Senior Athina Tsagkaraki and senior Ivana Plecevic completed the sweep with a 6-3 win over Edinboro’s own Kaede Tada Torye Calleja.
Tsagkaraki turned it 2-0 Lakers with a 6-2, 6-0 win at number two singles over Calleja. In addition, Budin picked up her eight straight singles victory with a 6-1, 6-1 score at number three against Zottele.
Budin spoke to her excitement towards the match and how it went, stating there were some good serves and volleys throughout the match.
“I had to keep the ball in with a good intensity and tried do not be distracted by my opponent’s game,” said Budin.
Lewis scored a 6-1, 6-1 win at number four over Nadai, pushing her personal win streak to nine matches. Theodora picked up her final victory for the night for Lakers 6-0, 6-1 at number five over Cevera.
The Mercyhurst women’s tennis team currently holds the third and final post-season ranking in the PSAC West division. The Laker’s current overall score is 6-6 with a 3-2 conference score. The team also has a three-game winning streak.
The Lakers competed in their final PSAC match for the season yesterday when they traveled to Clarion, PA to face the Clarion University Golden Eagles. The match was held at the Campbell Courts at 4 p.m.