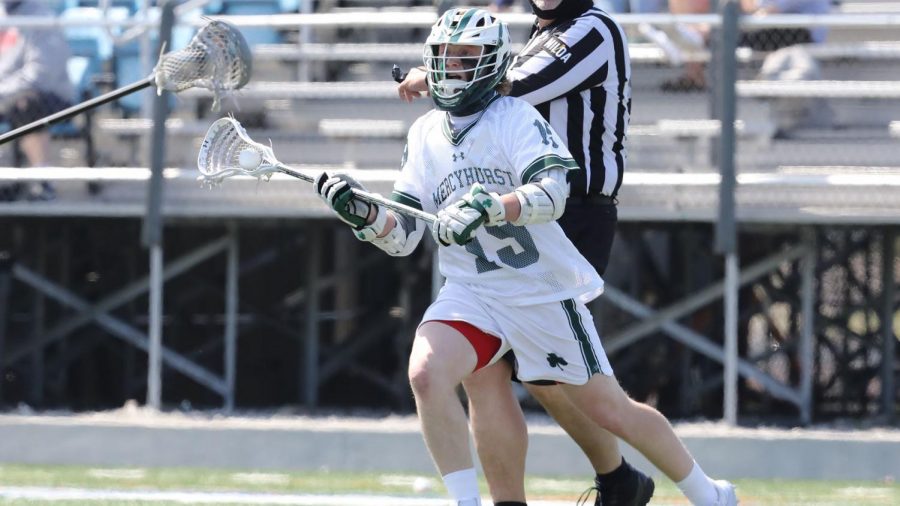 The Mercyhurst Men’s lacrosse team won their ninth game of the year this past Saturday against Alderson Broaddus with a score of 25-5. The game was played at 2pm at Saxon Stadium.
The Lakers came out with a quick start by scoring 11 goals in the first quarter alone. Senior Nathan Grenon put up the first goal just 15 seconds into the game off an assist by senior Caleb Kueber. The score became 3-0 within a minute as both Kueber and Grenon contributed additional goals.
Within the next two minutes Mercyhurst put another three on the board. Junior Jacob Emerson, senior Devin Pipher and sophomore Patrick Carrozzi each had a goal. Pipher also assisted on both the Carrozzi and Emerson scorings.
The score became 7-0 as freshman Luke Ingianni found the net a little over five minutes into the first period. Sophomore Jared Butler was next to score with a little under 2 minutes left in the period. Freshman Colin Schmatz scored one and Casey Scott scored two to round out the first quarter with an 11-0 score.
The Battlers scored their first goal of the game in the second quarter. Mercyhurst returned with a Bryce Johnson goal to make it 12-1 followed by a goal from Kueber to go 13-1. Pipher racked up assists on both of the Johnson and Kueber goals, totaling four assists. Kueber scored again off yet another Pipher assist for goal 14 just six minutes into the second. Two goals were added by the Lakers to end the second, coming from sophomore Quinn Simonson and Scott.
The third quarter saw goal contributions from Ingianni, Willard, Schmatz, Kueber, Butler and Scott. Freshman Scott Newell had his first assist of the game off the Scott goal.
The fourth quarter saw goals from Schmatz and freshman Nate Latshaw to round out the game.
The victory for the Lakers gives the team a 9-1 record and has secured the men the No. 1 seed for the upcoming Great Midwest Athletic Conference tournament. The team looks to compete again this Saturday night as they travel to Lake Erie College for a 7pm game.