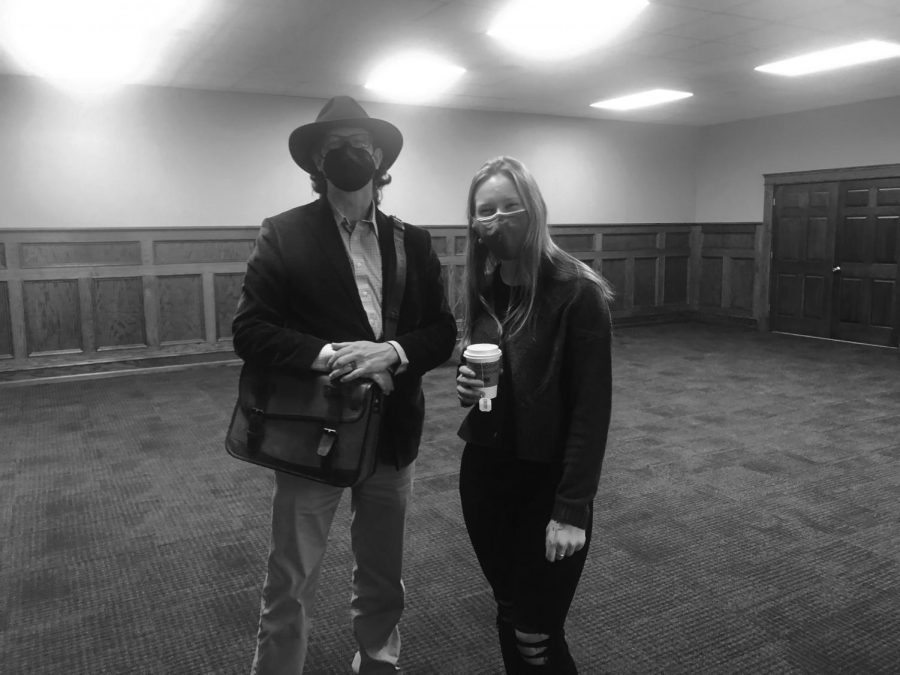 Dr. Gregory Brown and student Megan Siegfried conversing over tea and snacks at the Victorian Tea event on April 21 at the Mercy Heritage Room.

Throughout this difficult semester, very few in-person events have been possible. This has undoubtedly created a sense of disconnect between students and professors alike.
At this point in the semester, however, some socially-distanced events have been able to occur.
Last Wednesday, April 21, the Hafenmaier College and Sigma Tau Delta co-hosted a Victorian Tea pop-up event in conjunction with Parkhurst Dining.
This socially-distanced gathering allowed for a small semblance of normalcy in the form of good company and good snacks. Both students and faculty of the English Department were invited to stop by for a bite to eat and a friendly chat.
One student in attendance was senior Megan Siegfried. Siegfried is the President of Sigma Tau Delta and a student of the Hafenmaier College and was involved in the planning of the event.
“Dr. Rieger is teaching a course in Victorian literature this semester,” said Siegfried, “so it was her excellent idea to host a Victorian tea inspired event.”
After Dr. Christina Riley-Brown, Dean of Hafenmaier College, decided to sponsor a fun event for students, Dr. Christy Rieger suggested that a tea party would make perfect sense.
“There are so many rich and pivotal tea scenes in the texts, including Alice at the Mad Hatter tea party and characters’ social sparring in The Importance of Being Earnest,” said Dr. Rieger.
Both Jackie from Parkhurst and the Sigma Tau Delta officers liked the idea.
Using this idea, Dr. Rieger was able to orchestrate a perfect event for her fellow lovers of literature.
The initial intent for the tea party was to have an outdoor social in Trinity Green reminiscent of a classic garden tea service. However, plans quickly had to change when a burst of snow covered Erie and an outside event became entirely out of the question.
Thankfully, the organizers of the event quickly took action and relocated the event to the Mercy Heritage Room. Everything was seamlessly edited, and the event endured regardless of the sudden challenge.
This small hiccup certainly did not douse the spirits of those in attendance.
“We had to move the event indoors because of the snow. Even though it did not take place as I envisioned, it was so enjoyable,” said Dr. Rieger.
The new location served as an intimate gathering space that perfectly suited the theme of the party.
The biggest hit of the event was undoubtedly the table of refreshments.
“The cucumber sandwiches, plus special scones and tea cookies, were delicious,” said Dr. Rieger. “My favorite part of the event, though, was seeing current students, English majors and faculty in a space outside of the Zoom/classroom context. We had a chance to reconnect on a more personal level,” said Dr. Rieger.
“If there’s one silver lining to the pandemic, it is that it has shown me how important these types of gatherings are for our community.”
Siegfried agreed with this sentiment, “This semester has been difficult, and it hasn’t offered much opportunity for socializing, but this little get-together made things seem somewhat normal again. It was very nice talk to some of the English department faculty and students that I haven’t seen much this year.”
The tea party was certainly different than the organizers imagined, but, if this year has taught us any lessons, it is that we have to be able to adapt.
It feels like such a privilege to be able to have events like this again, and hopefully we will feel more of that next semester.
Here is to hoping that more events for students, faculty and staff alike will be able to return to in-person gatherings next fall!