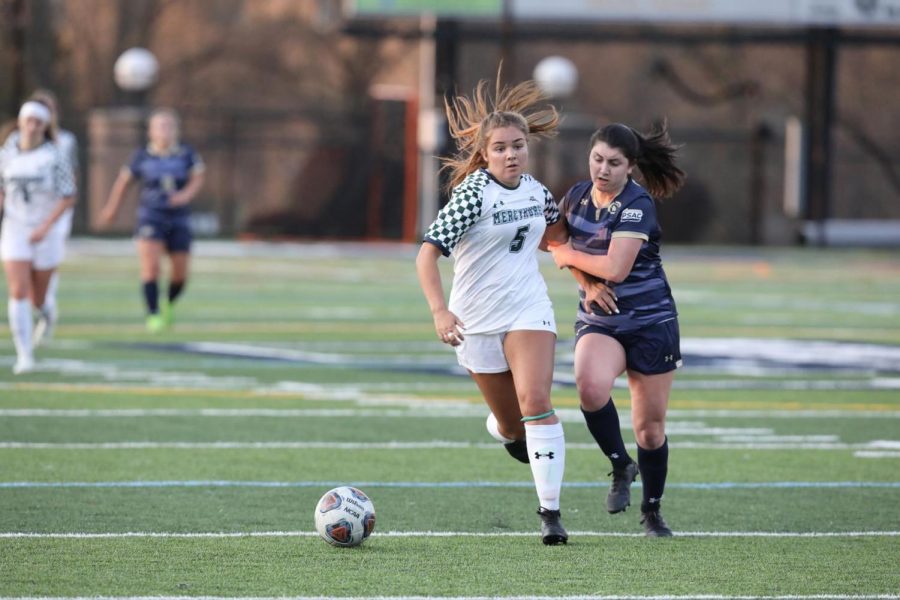 The Mercyhurst women’s soccer team faced off against Erie rival, the Gannon University Golden Knights, in a Thursday night doubleheader on April 22nd. In the first game at 5:00 o’clock, neither team was able to score during the first half. Gannon’s Golden Knights had the first two attempts, with one being a 7th minute shot inside the 18-yard box. Thankfully, freshman goalie, Maddie Elbro, was able to prevent it from going in.

The Lakers also would have various attempts at cashing in throughout the half. Emily Mijares had a shot in the 14th minute that deflected off of the crossbar while Taryn Baxter had a nice shot from a free kick which was saved by Gannon’s goalie. Mercyhurst had another chance off of a 30th minute free kick from Emma Scali. The ball had a chance as a few Lakers got their foot on it, but it didn’t ultimately result in a goal for Mercyhurst.

Mercyhurst freshman, Alyssa Poleski, had a nice shot on goal in the 36th minute but this was also saved by the Golden Knights goalie. That shot was the last scoring opportunity for either competing side in the first half of play. Both teams had a rough start to the second half of the match. It was difficult for both teams to keep possession of the ball. Emily Mijares had another great play in bringing the ball inside the 18-yard box in the 57th minute. She attempted to pass it to a Laker that was flying down the field in Alyssa Otto. Unfortunately, the pass barely missed and ended up not resulting in a goal for the Lakers.

Mercyhurst may not have been able to cash in on any opportunities on offense for this game but their defense was superb. As a testament to this, they made several key defensive plays at the end to keep the match a tie. Maddie Elbro was forced out of the way by a Golden Knight attacker and the attacker was able to get a shot at the open net in the 70th minute of play. Fortunately, however, sophomore Madison Hoover was able to clear the ball away. Only a few minutes later, Bethan O’Donnell made an incredible play which was most likely the play of the match for Mercyhurst. She was able to clear a shot that Gannon had put on goal that was only a few inches away from crossing the goal line.

Maddie Elbro also got her fair share of work in as she was able to make two late game saves. She made a diving stop on the first in the 79th minute and was able to stop the second one in the 83rd minute. This defensive effort was able to amount in a 0-0 tie. The reserve team would then go on to play the Gannon Golden Knights immediately afterward. This match resulted in a 1-1 draw. Dani Hartman scored the lone goal for the Lakers off an assist from Emily Parker. Kaitlyn Low also played incredibly well in goal and saved 2 last minute shots in order to save the tie. Mercyhurst is now 3-1-3 on the season and they will close out the Spring Season at Penn State Behrend on Saturday. The match is for 2:30 P.M.