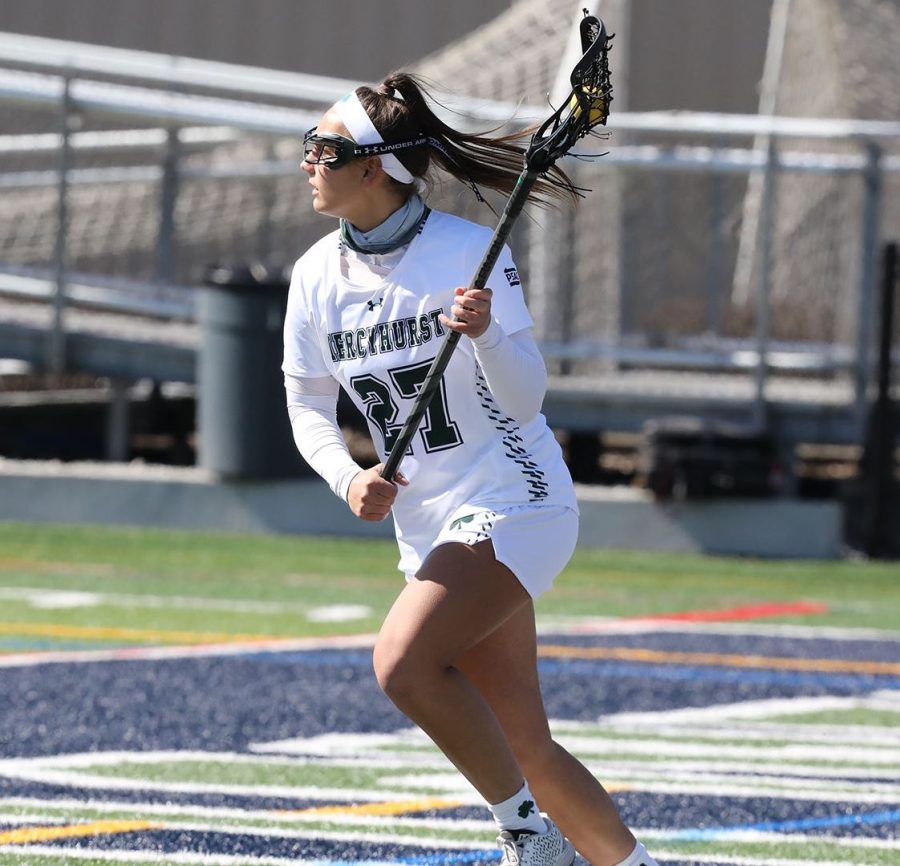 On Saturday, April 24th the Women’s Lacrosse team traveled to Charlotte Smith Field to play Lock Haven University Bald Eagles to continue their Pennsylvania State Athletic Conference West Division Play. The lakers were able to add another win onto their record with a strong second half performance that left Lock Haven scoreless in the last 22 minutes of play.

Paige Cocina was the first Laker to score against the Lock Haven defense. Soon afterwards Julia Rescott added another tally to the visiting Lakers board. This gave the Lakers a wuick 2-0 lead and gave them the momentum early in the game. The two sides went scoreless for about ten minutes in the first half of the game while both sides battled to claim another point to their board. Mercyhurst was able to then score four consecutive goals that were scored by Molly Meegan, Victoria Gottorff, and Payton Cook with two. This gave the Lakers a 7-4 lead with just under three minutes remaining in the first half.

Julia Ruscio believed the highlight of the game began in the second half as the Lakers left the Bald Eagles scoreless with their strong defensive structure.

Lock Haven came out of the second half strong and was able to bring the score to 7-6 with only about 2 minutes gone. Julia Ruscio was able to get the next goal of the game to keep the Lakers ahead of Lock Haven. Shortly after that LHU scored a goal but was met with an answer back from Julia Rescott to bring back a two-goal deficit as the score was then 9-7. Cocina was able to get around the Lock Haven goalie and wall with her second of the afternoon. Lippert was able to hold her own in goal and lead the Lakers to an 11-7 win over the Bald Eagles.

Payton Cook, a starter on the Women’s Lacrosse Team, believes the team worked very hard and diligently together. “Over half of our goals were assisted which shows that we worked together on the offensive end and set each other up for success. The entire game was close in score. At any moment it could have been anyone’s game. We did what we do best, which was keep our composure. Keeping our composure, not worrying about the score, and continuing to play how we’ve been playing allowed us to win the game”.

Ruscio gives a shoutout to their goalie, Kait Lippert, for having 11 saves in the last 22 minutes which helped leave the Bald Eagles scoreless. Ruscio also explains how Mercyhurst outworked and outhustled Lock Haven in the draws as Mercyhurst was able to gain 11 controls.

This win for the Lakers was huge because since they won, they have officially made it to the PSAC tournament, and they have a chance at winning the championship overall to be named the best team in the PSAC.