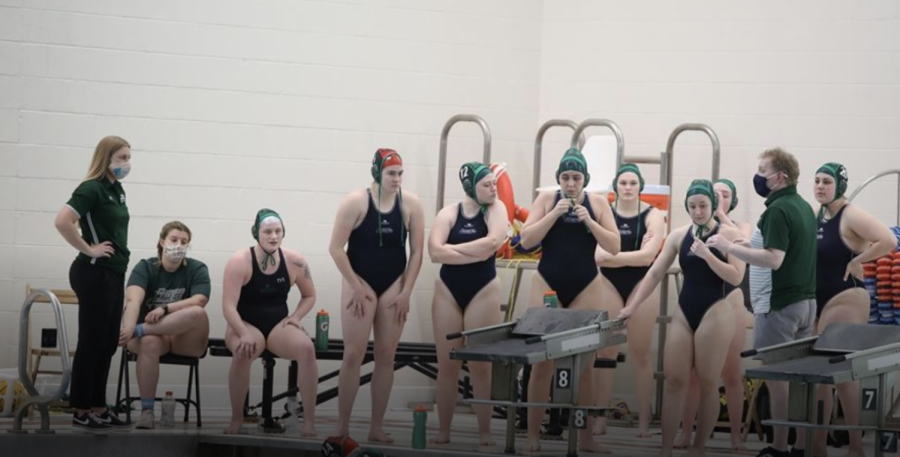 This past weekend the Mercyhurst Women’s water polo team traveled to Lebanon, Illinois to compete in the Western Water Polo Association (WWPA) Championships. The Lakers fought hard and in the end, were able to take home the second-place ranking for their 2020-2021 season.

On April 24, the team played two games one versus the McKendree University Bearcats and another versus hometown rival Gannon University Golden Knights. On day two the Lakers faced the Fresno Pacific University (Calif.) Sunbirds and the Salem University Tigers.

The first match began at 9 a.m. against McKendree University. Although the Bearcats fought hard, the Lakers pulled out a 7-6 win advancing them further in the Championship. The second game was played against hometown rival, Gannon University at 5 p.m. In a weird coincidence, Mercyhurst also took home the win with a final 7-6 score which advanced them to the Semi-Finals on Sunday, April 25.

For the first game on Sunday, Mercyhurst faced Fresno-Pacific University. The Lakers were able to take on the challenge of the Sunbirds for a win with a final score of 10-8. The win would lead the Lakers to face No. 25 ranked Salem Tigers.

Entering the match strong, not a minute and a half into the game, junior center Sara Marin scored giving the Lakers a 1-0 lead. A minute later, senior  Maddie Nye scored tearing one into the net. Nye also gave the Lakers their third point for the evening with four minutes remaining in the opening frame by scoring a penalty shot.

The Sunbirds had finally had enough and retaliated by scoring the next four goals. They kept the Lakers off of the board for eight straight minutes and took the lead 4-3 with 4:39 left in the second period.

Sophomore  Hanna Good interrupted their run with roughly four minutes left by scoring on the powerplay to tie the game 4-4. Fresno-Pacific took back their power scoring two more before the end of the half to make it 6-4. The Lakers returned the sentiment with Good hitting the back of the net one more time with 51 seconds remaining on the clock. Her second goal for the game, and ending the score 6-5, Fresno-Pacific.

At the beginning of the third, the Sunbirds scored three more making the game 8-5. The fourth started with the Lakers down three, but 85 seconds into the period, Marin was able to bring the Lakers within two points. Riding off of Marin’s momentum, Nye scored with 2:43 remaining in the game making it 8-7.

Less than a minute later, Marin got a hat trick, tying the game at 8-8. Any good offense is just as strong as their defense. Defensive senior player Rachel Morris scored one more with 47 seconds remaining for a 9-8 total, Lakers. Nye would soon then complete her own hat trick scoring the final goal for the game with five seconds left.

Senior goalie Sarah O’Keefe continued with the Lakers’ great play in the cage making 11 saves and tallying a steal for the win. Mercyhurst managed to outshoot Fresno-Pacific 31-24 earning themselves the rights for the final game in the Championship against the Salem Bearcats.

Although the Lakers fell to the Tigers with a score of 8-4, Mercyhurst was able to take a second-place ranking in the championship back home to Erie, PA. The Tigers came out strong earning themselves a 2-0 lead in the first period. The Mercyhurst Lakers were able to outscore the Tigers in the second for a 3-2 lead. Sophomore Hannah Engquist put points on the board seconds into the second frame making it 2-1. Freshmen Rachel Vlietstra was able to bring the score to a tie, 2-2, with less than five minutes remaining in the second. Less than a minute later, Salem took back the lead 3-2, and then 4-2 with three and a half minutes left. With 34 seconds left in the half, Marin sent one into the back of the net scoring her first goal of the game bringing the score to 4-3. Despite many chances, the Lakers were unable to hit the net while Salem scored once more for a 5-3 lead heading into the fourth and final frame.

With a little over five minutes remaining in the fourth, Anderson scored a penalty shot. The Lakers eventually succumbed to the Tiger’s advances allowing them to score three more for a final 8-4 score. With 18 out of their 28 shots on target, they outshot the Tigers 28-22 overall with O’Keefe saving 8 in the net.

Although the Lakers did not bring home the big win, four Lakers ended the Championship in second and four players were named to both the Second and First All-Tournament Team. “We are a team that has amazing chemistry and we feed off each other’s energy, so when one scores a goal, we all get super pumped and keep pushing until the end” Marin said. ” We are all very proud of having achieved 2nd in the WWPA Championship and know that we could not have achieved it if not for all the hard work we have been putting in since last fall. But we will certainly come back next season stronger and ready to fight our way to the top.”  Nye and Marin were named to the Second Team while O’Keefe and Anderson were named to the First Team.