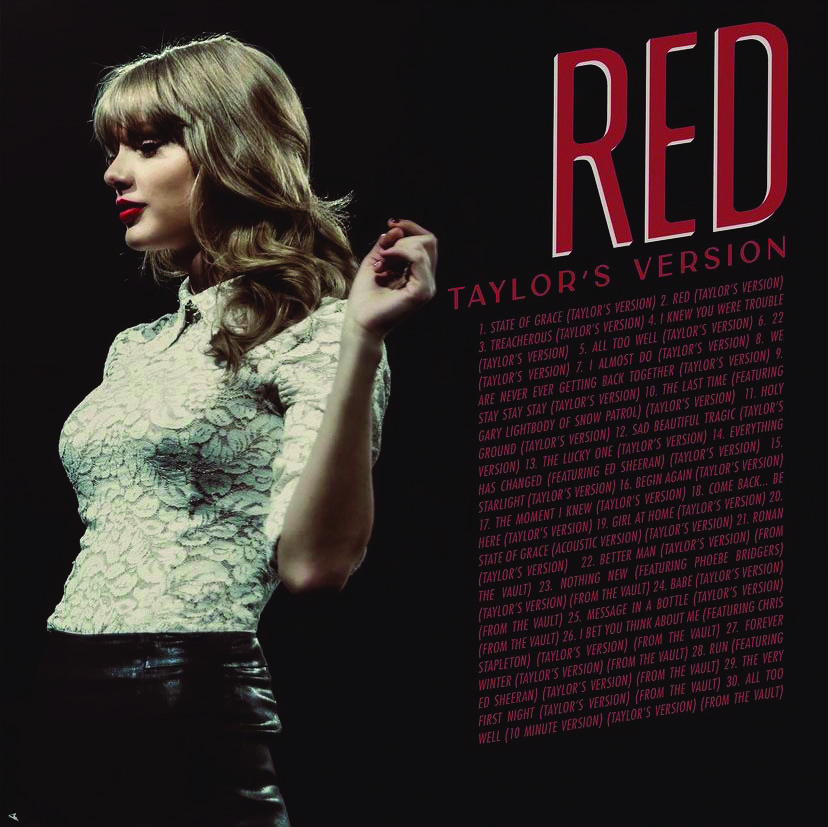 For many, Taylor Swift’s era of country heartbreak songs and red lipstick may seem worlds away; but on Nov. 19 of this year, the star will be re-releasing her Red album.

While it is labeled as country, there is something for everyone on the album.

“Red (Taylor’s Version),” will have a total of 30 songs, as opposed to the original 22 (including the bonus tracks). Nine of the new songs are “from the vault,” which means they were not on the original album but were initially written to be released at the same time.

Some of these vault tracks will feature different artists, such as Phoebe Bridgers and Chris Stapleton. The song “Ronan,” which was only ever released as a single, will be included on the album, along with a ten minute version of “All Too Well.”

Fans are very excited to experience these songs for the first time again and learn the lyrics to some brand new ones.

Most people don’t know why Taylor Swift is rerecording her albums, so here’s the breakdown. Shockingly, Swift doesn’t own five out of her nine studio albums.

The artist signed a 13-year contract to Big Machine Records in 2005 when she was only 15 years old. By doing this, she agreed to give up the master copies of her albums; however, she was never given the chance to buy them back.

This resulted in her plan to rerecord her first six albums after her contract ended in 2018 so she could finally own the albums she devoted her whole life to creating.

I predict that it will do even better than “Fearless (Taylor’s Version)” because Red was more popular than Fearless was when the albums were originally released.

Swift and her team did a great job of picking a release date because Red is a perfect album for fall.

Originally released in October of 2012, the heartbreak anthems give off a cold, fall feel with a lot of autumn imagery included in
the lyrics, as well. Even the colors of the leaves on the trees outside will be burning “red.”

For a lot of people, the release of “Red (Taylor’s Version)” will be filled with nostalgia. Many of us remember singing the words to “I Knew You Were Trouble” and “22” as kids with our friends and taking fall walks while listening to the rest of the album.

A lot of fans remember buying tickets and going to the Red tour, and I’m sure so many of those happy memories are going to come flooding back.

I am really looking forward to hearing “State of Grace” and “Holy Ground” especially because those are two of my all-time favorite Taylor Swift songs. “All Too Well” is also a fan favorite, and I can’t wait to listen to the ten-minute version of it.

“Red” was originally released almost ten years ago, and it’s going to be really cool to hear how Swift’s voice has changed and improved since then.

When “Fearless (Taylor’s Version)” was released, I really enjoyed listening for the subtle differences between the two albums, and I’m impatiently waiting to see what she has in store for “Red (Taylor’s Version).”

To say I’m excited is an understatement.

Get ready to feel happy, free, confused and lonely in the best way as we watch it all begin again on Nov. 19.