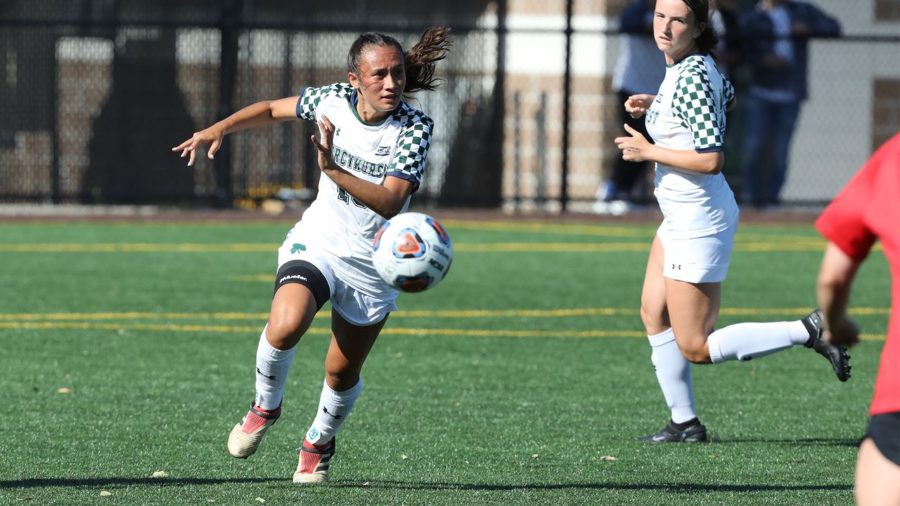 On Wednesday September 8, the Mercyhurst girls soccer team competed against the Edinboro Fighting Scots at Saxton Stadium in the afternoon. This was the home opener for the Lakers, but after a lot of effort and energy the Lakers were unable to pull off a win.

“We knew it was going to be a tough game, but we were excited for the challenge. Some of the decisions didn’t go our way, but it was a hard-fought game and we weren’t able to capitalize on our chances,” said women’s soccer player, AmataValentini.

During the first ten minutes of the game, both teams kept going back and forth with their playing. The fighting Scots drew a foul 15 minutes into the game, which in turn gave them a penalty kick. They scored on the penalty which meant the score of the game was no longer 0-0, and it was now 1-0 in favor of Edinboro.

In the first half of the game, the Lakers got 11 shots, three in which were on target. None of these shots got past the goalie and the ball did not make it into the net. The Lakers kept good possession of the ball throughout the game, but just could not get past the goalie.

In the 75th minute of the game Edinboro scored bringing their lead up to 2-0. However, in the 89th minute, Mercyhurst was able to get the ball past the goalie and into the net.

Amata Valentini got the goal for the Lakers after Madison Hoover passed the ball to Valentini off of a free kick outside the box. Valentini’s goal changed the score to 2-1.

Valentini said regarding her goal, “I’m happy I was able to score to give us a chance to get a result at the end but unfortunately it wasn’t enough on the day. In our conference, every game is important so now we move on and focus on our next match.”

For the rest of the game the Lakers tried their hardest on the field to have a tied score, but unfortunately were unable to.

“We were still down 2-1, but everyone was fighting to the very end. I am proud of my team and the hustle that everyone put into that game,” Hoover said.

However, Mercyhurst produced 19 total shots, with nine reaching the target. The Lakers kept control of the ball 62 percent of the time, and goalkeeper Maddie Elbro had four saves while in net.

“The ideal scenario is always to not have to make any saves as a goalkeeper, and I think we were fantastic in reducing their chances to only four, however it’s of course a great feeling to be able to help the team out when we need it,” Elbro said.

The Mercyhurst Lakers women’s soccer team will play against Daemen College in Amherst, New York. This game will be played on Saturday September 11, at 3:00pm.