From hurst to NLL 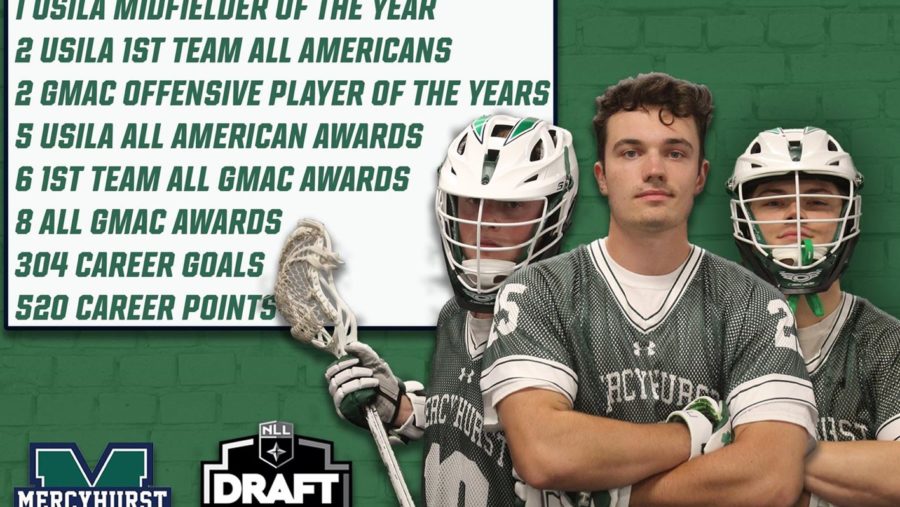 Three Mercyhurst Lakers had a great accomplishment of being a part of this draft. Nathan Grennon, Caleb Kueber, and Devin Pipher were all drafted.

Nathan Grennon was selected with the 11th pick, and got drafted by Panther City LC. Grennon had earned USILA Midfielder of the year along with being a First-Team-All- USILA All American resulting in  43 points, 32 goals, and 11 assists in only 14 games. Grennon was a three time All-G-MAC selection.

“Fort Worth being an expansion team is having there inaugural season in 2021, I am very excited to be on the first team and a part of history for the program,” said Grennon. When asked what his goals are for being a new player on team, this was his response,

“I just want to see the team succeed, fill my place do my part, establish a pivotal role on the team and help bring a NLL championship to Texas, I will be playing offensive so to establish a strong efficient offensive player.”

Caleb Kueber also got drafted to Pather City with the 17th overall pick of the draft. Kueber scored 56 goals and 32 assists in 14 games while he was playing lacrosse at Mercyhurst. He finished his college career with 188 points.

Another former Mercyhurst student that got drafted was Devin Pipher. Pipher was taken by the Georgia Swarm with the 37th pick. Pipher assisted the Hurst lacrosse team by scoring 50 assists and 24 goals resulting in 74 total points.

“Hearing my name being called in the draft was an experience I cannot even put into words. It has been a lifelong dream of mine to become a professional lacrosse player in the NLL, and that dream has become that much more real,” Pipher said.

“I was lucky enough to be surrounded by close family and friends when it happened which made the experience that much better.It was nice to see that all my hard work over the past 18 years has finally been recognized, but the job is not over yet.”

Being drafted into a National League is an  accomplishment for any athlete and their Mercyhurst statistics show how well these three Lakers played.

“I definitely feel like playing under coach Ryan and playing at Mercyhurst helped prepare me for the draft. Our practices were always very high tempo and super demanding in order for us to remain a top contending team in division 2 every year,” Pipher said. “Coach Ryan is big on nailing down the fundamentals in practice so that when it comes down to game time there are little to no mistakes, our hard work doing the little things right ultimately pays off in the long end.”

A goal of Piphers is to make the Georgia roster, along with winning a conference championship at his current school, Monmouth University and eventually win a  championship at the professional level at both the NLL and Sr. A level.