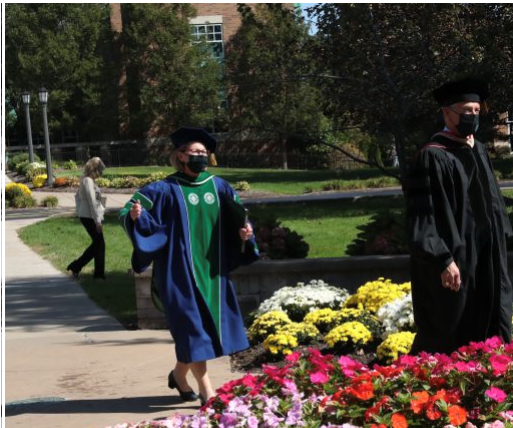 History has been made! Well, Mercyhurst history. This past weekend, Kathleen A. Getz, Ph. D. was inaugurated as the 13th President of Mercyhurst University.

As a member of the Mercyhurst Student Government Executive Board, I was given the opportunity to attend all of the inauguration festivities.

To kick off the weekend on Thursday, there was a movie night in the Preforming Arts Center showing the 1996 film “That Thing You Do!” starring Tom Hanks. The reason the film was shown is because part of the film was set in 1960s-Mercyhurst College and the surrounding Erie area. Attendees were given cowbells to ring whenever Mercyhurst was mentioned.

On Friday, there was an Inaugural Mass for all to enjoy. The Mass was beautiful with song, dance and even a surprise performance from President Getz herself.

Saturday was the big day. The day began with the Inauguration Ceremony in the Performing Arts Center.

To start the ceremony, all of the professors and dignitaries of the university processed in. The ceremony then continued with speeches from university officials and President Getz’s friends and family.

Later that night was Campus Celebration Experience. The event began with the Emerging Artist Showcase with features from the dance, music and theater departments.

“It was a fun time and I was really grateful they included all of the arts departments. It was also special to play for the new President and I’m glad we can share our love of the arts with her,” said senior Music Therapy major, Mikayla Tupek.

The evening continued with a historic Mercyhurst museum in the Mercy Heritage Room. This space featured memorabilia from the archives of all things Mercy-hurst, from our founding in 1926 all the way up to today in 2021.

Afterwards was the Piano and Jazz Experience in the Walker Recital Hall. This space was transformed into a jazz club. In the center of the stage was a piano and everyone was gathered around. While we mingled, we were also able to celebrate with one another.

The last stop of the night was the Grand Dessert and Champaign Reception. This was held in the Weber Hall Great Room. The space was magnificent; it looked like a wedding reception.

There was food, drink, a small band and people dancing.

During this I got the chance to speak with President Getz. When I asked her how she felt now that

she is officially president, she smiled, laughed and said she is just so happy and so excited to be here and for what is to come it the future.

An inauguration is a new start for everyone. President Getz’s theme for her presidency is a quote from Catharine McAuley’ pledging to be “good today, but better tomorrow.”

Now that we all as students, staff and faculty have finally ac-cepted her into our Mercyhurst community, we can all be Good Today and Better Tomorrow.