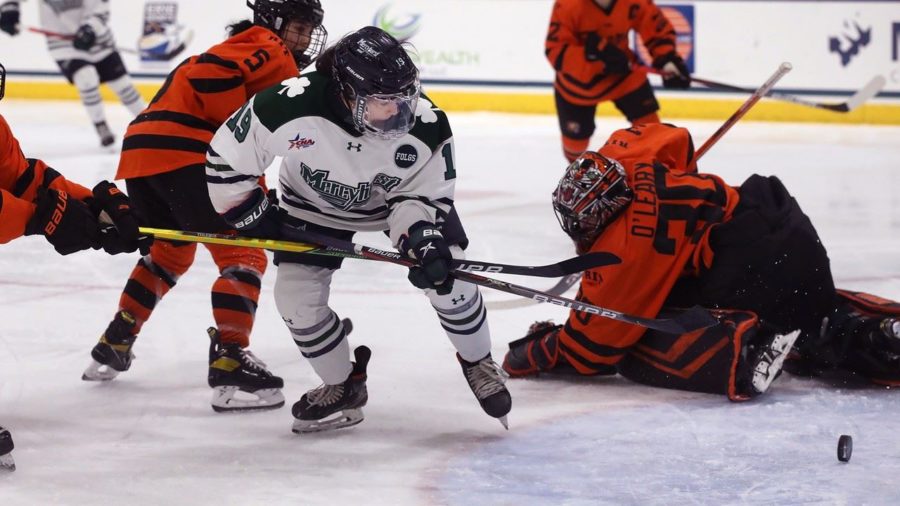 The Mercyhurst women’s hockey team traveled to Hamilton, NY over the weekend to take on the Colgate Raiders for a two-game matchup for the Lakers. The first game was on Friday, Oct. 1, 2021, and the Lakers put up a hard-fought effort.

They were a bit outmatched in terms of shots in the first period as they were at an 8-2 disadvantage. The Lakers goalie, Ena Nystrom, junior, only let in one shot. The matchup proved to be up to the hype as it was still a 1-0 effort going into the third period. The game truly opened up for both teams in the third period.

Mercyhurst was outmatched in terms of total shots as the final total was 32-21. Nystrom had a respectable effort in net, saving 27/31 shots. In the second game, it was also extremely competitive. Mercyhurst got off to a hot start, as they scored four minutes into the game on a powerplay from a tripping penalty. Jersey Phillips, sophomore, scored the goal with Grace Nelles, sophomore, and Perreault getting credit for the assists. The Raiders were able to tie the game at 1-1 at the 13:57 mark in the first period.

Mercyhurst was unable to take advantage of a later power play in the first quarter. The second period was once again quiet in terms of scoring. Mercyhurst had eight shots on net, but none of them were able to find the back of it. The Raiders gained their first lead of the game with a score at the 5:35 mark.

Colgate once again opened up the scoring in the third period with another goal which increased their lead to 3-1. There was hope again for the Lakers when Kristy Pidgeon, grad student, was able to score the second goal for Mercyhurst which made the game 3-2.

Perreault and Sara Boucher, sophomore, were both credited with assists. The comeback came up short, as Mercyhurst unfortunately was not able to score any other goals. Colgate made the final score 4- 2 with a late empty net goal. Jenna Silvonen made a valiant effort in net for the Lakers as she saved 24/27 shots. The Lakers are now 3-2 on the season and hope to get back on track against Franklin Pierce University in a two-game series that starts on Friday.