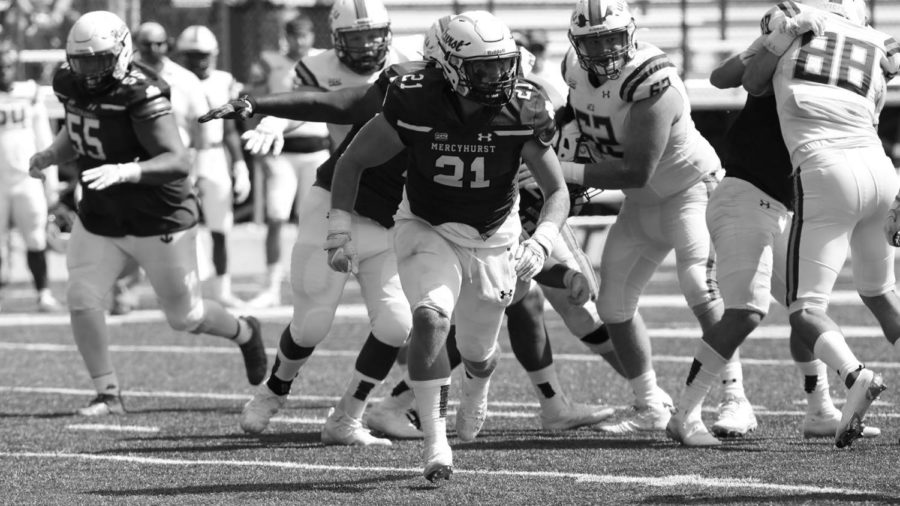 One of the best Homecoming Weekend traditions is the Mercyhurst football game. There are always numerous activities such as the annual tailgate that lead up to the game. There are also a large number of alumni, faculty/staff and of course, students who attend.

For the 2021 homecoming game on Sept. 25, the Mercyhurst Lakers took on the Indiana University of PA (IUP) Crimson Hawks. IUP and the Lakers have a long history as there have been 12 total games between the two schools. IUP leads the all-time series with a 10-2 record. Mercyhurst has not won against IUP since Oct. 9, 2010.

Only time would tell whether this would be the matchup that could break the streak. Mercyhurst was 1-2 heading into this matchup while IUP was 1-1. The game kicked off at 1:00 p.m. and the game did not start out as the Lakers had hoped.

IUP scored their first points of the game when they blocked a punt and returned it for 6 with a touchdown. Mercyhurst came right back with a 70-yard drive however, when freshmen Ayron Rodriguez caught a 17-yard touchdown pass from junior Michael Lowery with 10 minutes left in the first quarter. The 7 points that Mercyhurst received from this play were unfortunately the only points that they would get in the first quarter.

The Crimson Hawks went on to score 21 unanswered points in the late first quarter and early second. They scored on a 7-yard pass, 13-yard pass and a 1-yard run. The score by this point was now a 28-7 Crimson Hawk lead. Brian Alsobrooks, junior, played well for the Lakers, hitting two field goals to make the game 35-13 going into the second half. The field goals were from 39 and 30 yards respectively.

Mercyhurst was unable to get any sort of offense going in the second half while the Crimson Hawks added two more scores. The Crimson Hawks scored on a 6-yard touchdown pass and a 3-yard run.

The Lakers also took on the #25 ranked Cal (PA) when they traveled to California, PA on Oct. 2. The Lakers attempted to shake off a three-game losing streak, but it was ultimately not in the cards for them. The Lakers were held to just 106 total yards of offense with only 7 rushing yards.

They were unfortunately shutout against a tough opponent and the game ended with a final score of 37-0. The first quarter looked promising for the Lakers since it was only a 3-0 Cal lead. After the first however, it was all downhill as Cal scored 34 unanswered points throughout the game, resulting in 359 total yards of offense. The Lakers fell to a disappointing 1-4 start and they hope to break this streak when they go against Seton Hill on Oct. 9