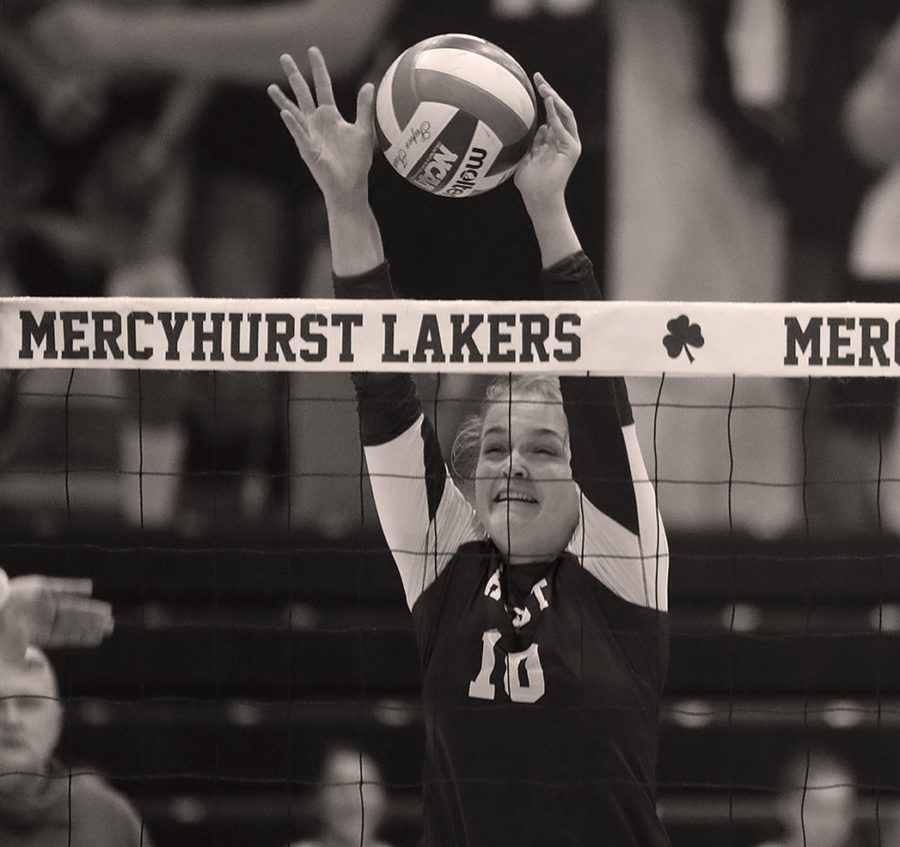 It was a nail biter, a leg bouncer, a close one. The Mercyhurst Lakers took on The Griffins from Seton Hill Friday night in a volleyball match that had the audience on the edge of their seats. In a set of five total matches, the women had to fight every moment to win each game. However, in true Laker fashion, they came out on top.

“We all push each other daily in practice, and that is translating to the big games. We have great athletes on this team, and we play hard every position,” said junior setter, Alexa Mitchell.The Lakers out of the gate were standing at 2-1 after the first three sets. The first set was a close one with the Lakers scoring a 24 against Seton Hill’s 26.

The game continued to the second set where our ladies came out on top with a reversed score of 26-24.The Lakers needed two wins to get back on top to score 3-2 in total. This was going to be an up-hill battle for the team. They would need to conquer the Griffins in the last two sets to take the win. Senior libero, Hannah Vuylsteke said, “I think we have a great wide range of skills this season and an all-around good team. We have some solid blockers at the front of our net, which pose a huge threat to our opponents. We also run faster offense which works to our advantage in finding holes in the blocks and using our opponent’s block to win points.”

The Lakers would need all these skills and more to set them back on top to finish out the game. The third set resulted in a 25-23 score against the Lakers. In the fourth set, the score was tied at 9-9 half-way through which is when the nail biting began. The Lakers put their heads down and ran an 8-2 which put them at a 17-11 advantage over the Griffins.The ladies held onto that ad-vantage just long enough to bring the final score to 25-23 resulting in a need for a fifth set as a tie breaker.This was the last chance for the Lakers to win the decisive fifth set.

Our ladies started strong with a score of 11-8 midway through the match. They held the Griffins by the reigns as they charged up to a score of 15-12, thus taking the win for the Mercyhurst Lakers against the Seton Hill Griffins. With the win, Mercyhurst had some MVP’s on the court on Saturday. Hailey Wilson, a senior, was in the lead with 13 total offensive kills. Right behind her were two other seniors, Beth Brady and Madison Kasper who took silver, each with 10 kills.

Sophomore Maggie Thomas helped the win as well on the defensive end with six blocks followed by senior teammate Chase Cole with four fantastic blocks. Junior Alexa Mitchell and red-shirt senior Claire Kenny split setting duties on Friday and were both phenomenal. Mitchell rung up a team high of 24 assists while Kenny dished out 19.

“My main motivation was to make my hitters look good. I always want to give my hitters the best chance to win a point with a kill. I also want to get better at defiance each game to give us a better shot at winning” said junior setter Alexa Mitchell when asked what her main motivation was for the game. This win was great for the Lakers putting them to 7-11 overall and 3-4 in the PSAC West.“I think after coming off a win from our rivals Gannon and Edinboro, it lit a spark within our team to attest to the fact that we have the talent to beat teams in our conference. I think we carried that momentum with us into the game with Seton Hill and it definitely showed” said Vuylsteke when asked what the team will be taking to their future games.The Lakers turn up for another showdown this coming Saturday with a road trip against Cal U at noon. The next volleyball home game is on Nov. 12 at 7:05 p.m. in the Mercyhurst Athletic Center.