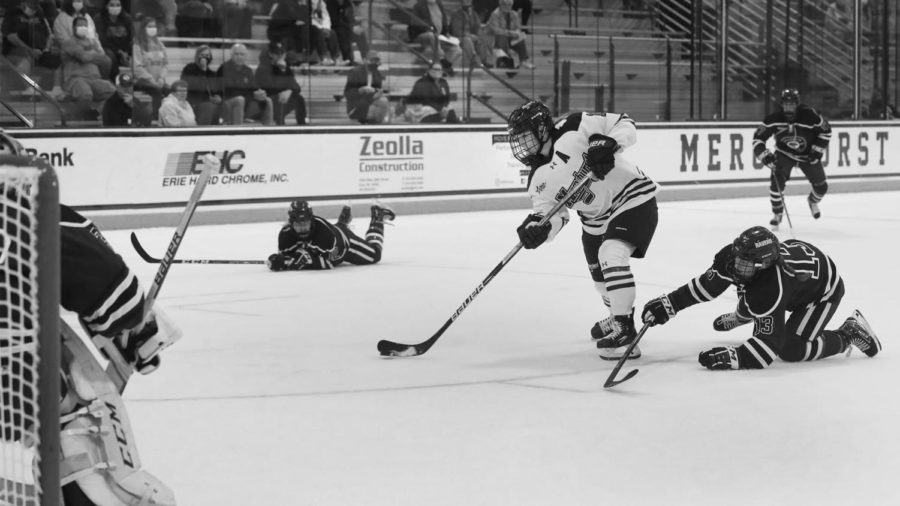 The Mercyhurst Women’s ice hockey team traveled to New York to play a two-game series against Union College on Oct. 15 and 16. In the first game, the Lakers beat the Dutchman 5-0 making it their sixth win of the current season.

The first period was score-less with Mercyhurst goalie Ena Nystrom, junior, saving 13 shots and the Lakers had eight shots on goal.In the second period, Vanessa Upson scored the first goal of the game. Upson, a freshman for-ward, is the point leader according to College Hockey America. The first goal was assisted by Sophomore Sara Boucher and Boucher later went on to score the second goal just three minutes after the first.

The final goal was scored by Upson for her seventh goal in just eight games. Boucher and Kristy Pidgeon were credited with assists. Nystrom ended up saving all 30 shots that she faced for her first collegiate shutout.

The second game of the series happened on Saturday where the game ended in a tie.The Dutchmen started off strong after their scoreless game the day before. Union College scored two minutes into the first period, but then Vasko returned the favor about halfway through the first period. Jenna Silvonen, a junior goaltender, made her fifth start of the season for the Lakers. Silvonen stopped every shot that was on her goal in the second period.

In the third period, the Lakers gained the lead again early on after Chantal Ste-Croix, sophomore forward, scored her second goal of the season. Emily Pinto and Alexandria Weiss were both credited with assists on the tying goal.The Dutchman scored again with about 10 minutes left in the third period, making it 2-2.

The rest of the period was scoreless, and since the game ended in a tie, the game went into overtime.The overtime was five minutes in length and had three-versus-three. In that time, the Lakers had three shots on goal and the Dutchmen had two, but none made it to the back of the net.