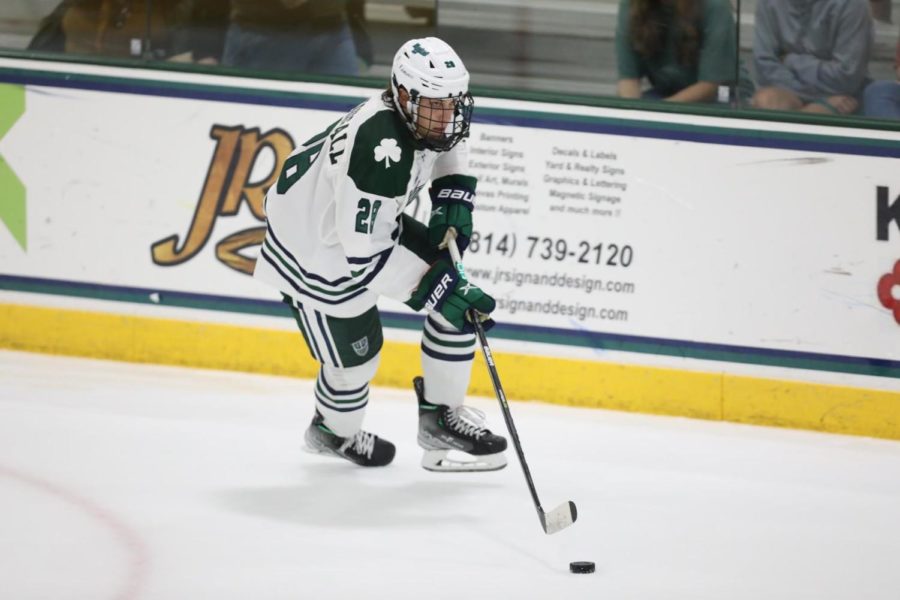 The Mercyhurst Men’s hockey team faced off against Sacred Heart University Pioneers twice this past weekend. This was the Lakers’ third Atlantic Hockey series for this year. These two teams have faced each other 58 times since 1999. The Lakers have won 27 games, lost 26 and tied five times.

The Pioneers won the last time the teams faced off in 2020, but before that, the Lakers beat the Pioneers four straight times.During the first game, the Pioneers took an early lead in the first period and had the only goal during that period. Barely 30 seconds into the second quarter, Sacred Heart scored another goal making their lead 2-0.

The Lakers finally got on the board about halfway through the second period when senior Steven Ipri tapped the puck into the net off of a shot originally from junior Rylee St. Onge.

Just 2:37 into the third period, the Lakers scored their second goal when sophomore Carson Briere got the puck in the net while he was skating past. Junior Jonathan Bendorf scored while the Lakers were on the powerplay with 10:52 left in the third period. Briere and freshman Austin Heidemann had the assists on the goals that gave the Lakers the lead.

Sacred Heart tied it up with about five minutes remaining in regulation.After 60 minutes of play, the teams were tied, which led to a five-minute overtime with 3 on 3. This overtime was sudden death, but neither team was able to score, so the game went to a shoot-out.

All three of the Lakers’ shots were stopped by Sacred Heart’s goalie, but unfortunately for Mercyhurst, the Lakers’ goalie was only able to save two out of the three shots.

In the second game, the start was very similar to their first one. The Pioneers took the lead after about seven minutes of play. Heidemann scored first for the Lakers in this game, with three minutes remaining in the opening period. Briere and senior Josh McDougall received the assists for the goal. Sacred Heart scored one more goal before the first period ended, making the score 2-1 in favor of the Pioneers going into the first intermission.

Sophomore Marko Reifenberger tied the game up at 9:53 during the second period. McDougall got his second assist of the night on Reifenberger’s goal. The Pioneer’s took the lead once again just 1:37 into the third period. About two minutes later, St. Onge scored, tying up the game again. Graduate student Pierce Crawford and Ipri had the assist on the tying game.

The third period ended with a tie, leading to a shootout for the second night in a row. The shootout went 11 rounds, and the Pioneers’ ended up winning the shootout 5-4.

The Lakers who were able to score during the shootout were Briere, sophomore Noah Krane, junior Guergui Feduolov and freshman Garret Dahm. Mercyhurst’s sophomore goal-keeper, Kyle McClellan had a career-high of 41 saves on Saturday.

The Lakers will take the ice again on Nov. 12 at 7:00 p.m. for their next season series against Holy Cross in Worcester, MA.