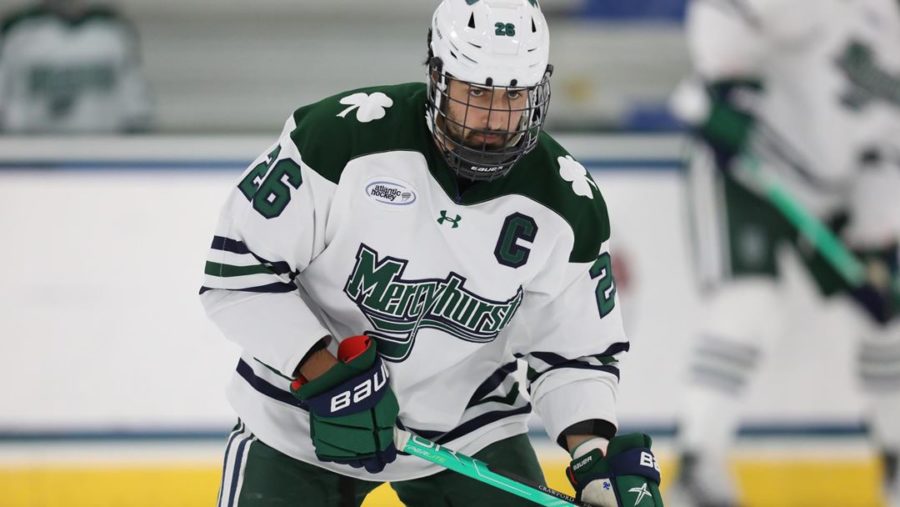 The Mercyhurst Men’s hockey team traveled to Worcester Massachusetts to face the Holy Cross Crusaders on Nov. 12 at 7:00 p.m. and Nov. 20 at 7:00 p.m. The Lakers pulled out a win on Friday, but lost in overtime on Saturday.

“Winning the first game was definitely exciting, as our goal for that weekend was to sweep Holy Cross on the road,” said sophomore forward Mickey Burns, “Unfortunately, we lost the second game in overtime, but it was still an important 3 points on the line Friday.”

Mercyhurst obtained their second Friday night win with a final score of 3-2. Just six minutes into the first period of the game, the Lakers scored their first shorthanded goal of the season. This goal was scored by senior forward, Steven Ipri, and was assisted by junior for-ward, Rylee St. Onge and senior defenceman, Devon Daniels. Ipri’s goal was the only one scored in the first period, which allowed the Lakers to enter the first intermission with a one point lead. However, the Crusaders had more shots on goal, with the Lakers being outshot 8-9.

In the second period, senior defenceman, Owen Norton, got the Lakers’ second goal of the game with assists from sophomore forward, Dante Sheriff, and senior center, Geoff Kitt. After 40 minutes of play, the Lakers had two goals and graduate student goalie, Hank Johnson, had 17 saves.

During the third period, the Crusaders ended their chance for a shutout and got the puck past the Lakers’ goaltender Johnson. This goal allowed Holy Cross to put a point on the board making the score 2-1 in Mercyhurst’s favor. Holy Cross did not stop the scoring, during the 16:09 mark of the third period, the Crusaders tied the game making the score 2-2. This meant the Lakers had to fight to get one more goal.

With just under a minute left in the third period, junior forward, Gueorigi Feduolov, scored his first goal of the season and won the game for the Lakers. Feduolov’s goal was assisted by sophomore center, Marko Reifenberger, and junior forward, Jonathan Bendrof.

The final score for this game was 3-2, with Mercyhurst pulling out a win.

The second game of the weekend did not end in the Lakers favor. The scoring started at 6:01 in the second period. Mercyhurst was first to put points on the board with a goal from graduate student forward, Pierce Crawford. This was Crawford’s first goal as a Laker. Defenceman junior, Cade Townend, and Ipri had the assists.

Just two minutes after Crawford’s goal, Holy Cross scored, tying the game. However, Mercyhurst dominated the rest of the second period. Burns scored his first goal as a Laker with an assist from Kitt and junior forward, Paul Maust.

“Scoring my first goal felt great. I wish we could have won the game in the end, but it was nice to find my first one with the Lakers,” said Burns.

With just under five seconds remaining in the second period, sophomore forward, Austin Heidemann got the puck in the net and scored, giving the Lakers a comfortable lead. The assists went to junior forward, Jonathon Bendrof, and sophomore forward, Dante Sheriff.

With 5:25 remaining, Holy Cross scored another goal, and then they scored again at the 19:32 mark, which meant the game was tied with each team having scored four goals. The game then went into overtime. Only 24 seconds into the start of overtime, Holy Cross shot the puck past sophomore goaltender, Kyle McClellan, for the game winner. Despite the goal getting past McClellan during overtime, McClellan had made 38 saves.

“I feel our team is in a really good position. We have had a lot of games go to overtime/shootouts lately, but not all have gone our way. We have been focused on figuring out how to close out games, and by doing so we feel we will be an extremely difficult team to beat,” said Burns. “Despite these mishaps, we are right up there with the rest of the teams in our league, which puts us in a good spot to hold first place with a few wins moving forward.”

The Lakers will next take the ice against Canisius College on Friday Nov. 19 at 7:05 p.m. at the Mercyhurst Ice Center.