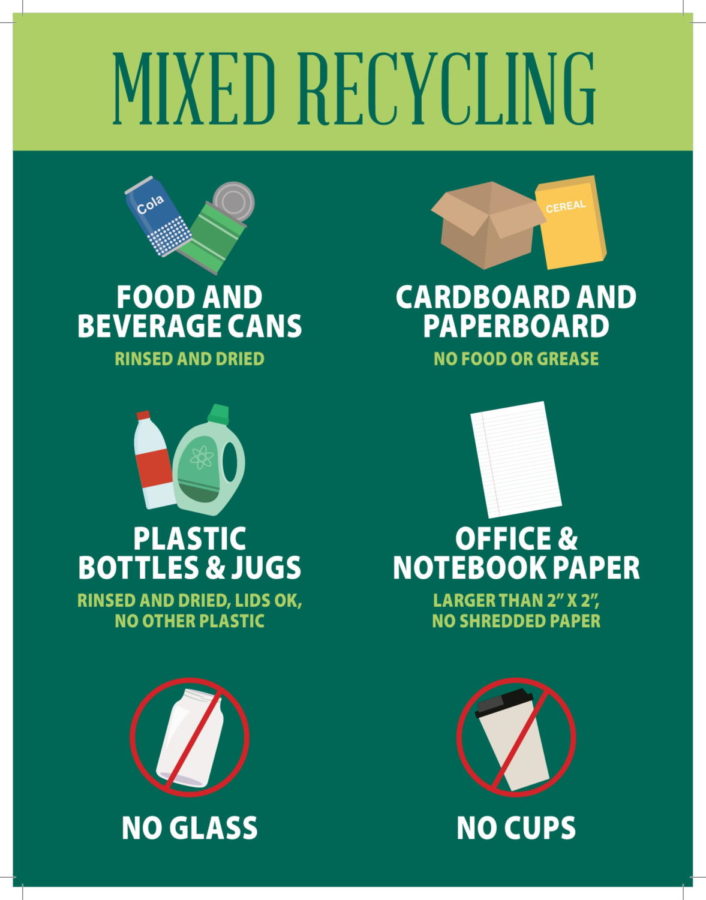 On-campus recycling resumed on Jan. 31 after a delayed start.

Colin Hurley, Mercyhurst’s Sustainability Manager, and the executive director of Community Engagement, discussed why there was a delay.

“Waste Management requires unbagged clean recyclables that comply with their guidelines, and because the Aramark contracted employees are not contracted for their duties to physically sort through the recycling and dispose of it in an unbagged way, the Office of Sustainability has had to hire and train a student team to handle this operation for much of the academic, administrative, and residential areas of campus over the last several school years. It is often dirty and challenging work, yet the students really make it happen and keep MU compliant,” Hurley said.

Hurley said, “The team uses a newer 2018 electric vehicle (EV) 4×4 to travel campus and collect recycling bags to carry out the important operation. If the university did not have a system for unbagging and sorting to achieve a clean single stream, it would be fined hundreds of dollars per dumpster per load by Waste Management and it would jeopardize the entire garbage truck load that would otherwise be clean and instead send it to the landfill.”

The process the recycling team goes through to recycle items had an unfortunate delay at the beginning of this semester.

“At the end of Finals Week of Fall 2021, that Sustainability vehicle was taken for service to a local repair shop. For a variety of supply chain, economic and health reasons, the repair shop has experienced unforeseen significant delays with the repair. The Community Engagement Department staff and the MU fleet vehicles came to the rescue during the week of Jan. 31 so the Sustainability team could at least resume some form of operations until their normal vehicle is repaired and returned,” said Hurley.

Recycling is a complex process and has become even more complicated since the start of the pandemic.

“An example of complexity would be something as simple as a plastic clamshell container that had strawberries in it. It has a #1 triangle arrow symbol on the bottom just like a #1 water bottle, but it’s not recyclable like the water bottle. How can this be since they have the same #1 resin code? It has to do with their material melting point and also the physical recycling process and the demand, thus the reason for asking for plastic bottles or jugs and not other plastic types ‘When in doubt, throw it out’ is a good saying for when someone is unsure,’” explains Hurley.

Unfortunately, companies who recycle do not always have the environment in mind.

“Recycling is a business, and if there isn’t the demand or a recycling process that can make a company money, those items that we wish or think are recyclable do often end up in the landfill,” said Hurley.

Many students on campus lack the knowledge on what can and cannot be recycled here at Mercyhurst. However, Hurley has created several mechanizes to hopefully change that.

Hurley said, “The entire process of recycling once an item is tossed into a bin is way more complex in 2022 than any of us probably realize. Recycling education should really be a part of the curriculum at MU. In fact, I created lesson plans and handson recycling kits for all IMU 101 classes to use in the Fall 2021, but unfortunately since the material couldn’t be mandated for each facilitator and section, most students didn’t receive the lesson. I remain hopeful it will be included in the future introduction to MU courses.”

Recycling initiatives have been taking place on-campus since it is such a vital part of being a sustainable school.

Hurley said, “While RAs were trained on recycling in Summer 2021 and encouraged to discuss it with their residents, there are a variety of physical challenges residents encounter ranging from how recycling is to be properly disposed of, the bin types and locations, Waste Management’s regulations and system and having apartments with no common indoor area for collection.”

Recycling is not the only sustainability effort occurring on campus. At the moment there are several initiatives taking place to make campus an eco-friendlier campus.

“We’ve recently completed a successful feasibility study on a large solar installation for Ryan Hall’s roof. The project leaders are now discussing financing options and hope to have good news to share later in 2022,” said Hurley.

Mercyhurst is also working to combat excess food waste. Instead of throwing food scraps in the garbage, extra food is being used as compost to give nutrients to growing plants.

“The office has partnered over the last year with the kitchen team in Grotto Commons and a local food compost company called Conservation Compost so that on a weekly basis we save up to 250 pounds of food prep waste from the landfill and send it to be turned into compost that can then be used by the public,” Hurley said.

On top of all that, have you seen the trees that were planted outside of the Center for Academic Engagement last semester?

Hurley said, “The Sustainability Office helped with some logistics and planning for the recent addition to campus known as the tiny forest which is being led by Dr. Chris Dolanc.”

It is important that we all recognize the work that is being done behind the scenes to make the Mercyhurst campus more earth centered.

“As a part of a 2030 District commitment to reduce our energy and emissions by 50% by 2030 as a university, we have a graduate assistant through the office who is helping to track our energy and water use for campus buildings so eventually we’ll be able to understand our university’s energy and water performance and make strategic building improvements over time,” Hurley said.

“It’s important to realize that this work is a team effort for the entire university and there are a variety of people who commit daily to being good environmental stewards and teaching and modeling the behavior for others.”

“It is also important for everyone to see the human connection in what we are doing, especially in light of climate change’s effects on the most vulnerable. In fact, President Getz recently signed a seven-year commitment with many other Catholic universities around the world so MU can become a “Laudato Si” University. As Lakers, we will journey forward together towards a more integral ecology for both the people and planet to flourish,” said Hurley.

The university also has a sustainability club. If any students are interested in joining, they can reach out to the club President, Erin Smith, for more details.

Remember, it is up to us as people to care for our planet. Recycle what you can and throw away what you can not. Do not leave trash on the sidewalks, in the road, or on the grass. Support the eco-friendly initiatives that are happening on campus. We only have one Earth, so we must work together to make the planet healthy again.