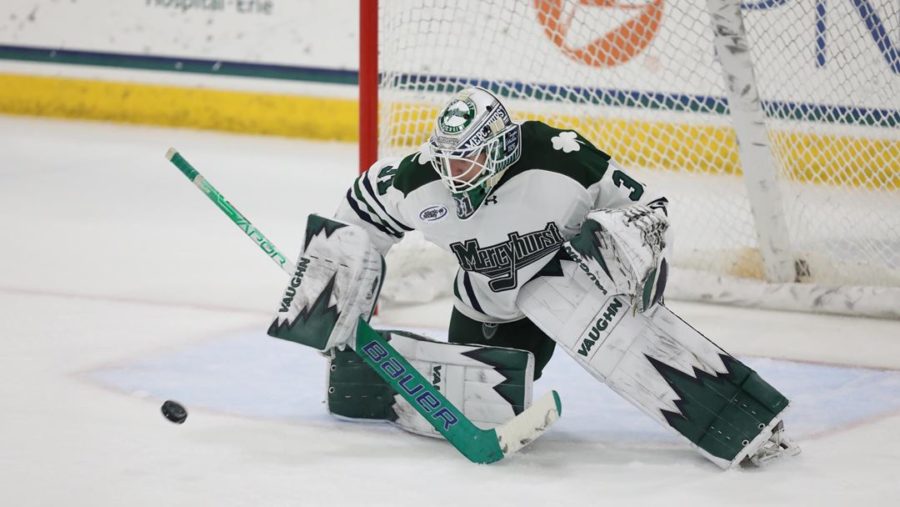 The weekend consisted of two games between the teams up in West Point, New York. In the first game, the Lakers swept the Black Knights 4-0. Unfortunately, the second game had quite the opposite outcome as the Lakers lost 5-1.

During the first intermission, Lakers sophomore goaltender, Kyle McClellan, already had 20 saves. After dominating the first period, the Lakers also dominated in the second period as the lone goal was scored at the 7:26 min-ute mark by graduate student Pierce Crawford. Jake Beaune, freshman, and Noah Kane, sophomore, picked up the assists. Neither team was able to score during the third period.

In this game, Mercyhurst was able to show how talented their whole team is including McClellan who had a total of 47 saves. This is McClellan’s career-high for saves and also happens to be the most in Atlantic Hockey this season.

In the second game of the weekend, the Lakers fell behind quick-ly as the Black Knights scored just 34 seconds into the game and then again three minutes later. The Lakers were unable to score in the first period and they were outshot 20-12.In the second period, both teams were able to score.

Army scored at 5:50 into the period and the Lakers were able to retaliate later in the period. Marko Reifenberger, sophomore, scored at 13:38 to get the Lakers on the board and his third goal of the season. The goal was assisted by Feduolov. In the third period, Army scored right in the middle of the period, and then again with just 2:30 left in the game. While the Lakers were unable to score again, they were able to take 40 shots on goal for the third time this sea-son. McClellan’s save percentage is .918.

The Lakers only have six games left in their season and the next game is home against RIT on Feb. 11.