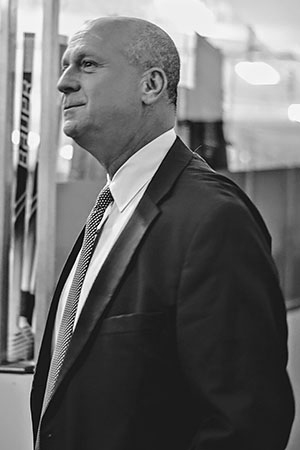 Rick Gotkin started playing hockey as a young child and eventually was able to make an entire career out of his enjoyment of the sport.

In 1988, Gotkin became the head coach of Mercyhurst’s men’s ice hockey team and has been leading teams to victory for 34 seasons. Prior to working at Mercyhurst, Gotkin had several other coaching experiences: Rensselaer, SUNY Canton and SUNY Brockport. Ultimately, Gotkin said he came to Mercyhurst for “the chance to build a program from the ground up.”

Throughout the past 34 seasons, Gotkin has seen dozens of players come through the program. Gotkin understands that the sport is not everything. He constantly stresses the importance of academics to players. For years, players on the team have had a high academic standard. When recruiting men to play for the team, Gotkin always examines a player’s skating ability, competitiveness, as well as their IQ.

Gotkin has always encouraged players to do their best on and off the ice. Prior to each game, Gotkin tells the players to “Trust the Process.” After a hard loss he encourages the team to “learn from our mistakes, and then get back to work as a team,” said Gotkin. Even years after players graduate, Gotkin likes to remain in contact with former players to ensure they are doing well.

It is important to note that Gotkin does not spend all his time at the ice hockey center. This past summer, Gotkin and his wife, Dianne, took up Pickle-Ball. The duo enjoys playing the game during all seasons whenever they can get a spare moment. The couple also golfs together and like to travel whenever they get the chance.

Gotkin and his wife have a daughter and a son together. Their daughter Lindsey is currently a practicing attorney in Washington D.C. Their son Brandon played for Mercyhurst’s Men’s ice hockey team during his undergraduate years. Brandon followed his father’s steps and is currently coaching the Maryland Black Bears.

Throughout the years, there have been many game moments that Gotkin still remembers vividly to this day. However, the one game that always sticks out in Gotkin’s mind occurred in 2001 when the men’s ice hockey team played in the NCAA Division One National Tournament. Gotkin said it was “very exciting” to almost upset the University of Michigan, which was the number one team at the time of the tournament.

Throughout his time as Mercyhurst’s head coach, Gotkin has achieved a lot, including being inducted into the Erie Chapter of the Pennsylvania Sports Hall of Fame in June of 2015. When asked if there was anything else he would like to achieve while he is still the head coach at Mercyhurst, Gotkin said that “there is always more to do for sure. I would like to see our team win another league championship and return to the NCAA Division One tournament for the fourth time.”

With a few games left in the 2021-2022 season, we will all be keeping a close eye to see what the team and Gotkin accomplish next.