Get to know Women’s bowling coach 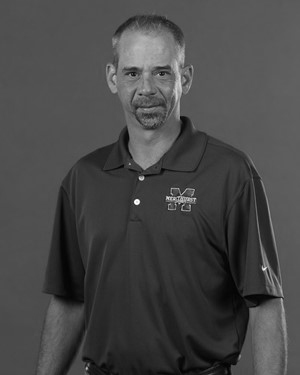 The women’s bowling team became Mercyhurst’s 25th varsity sport and in just their second season in 2019-2020, the Lakers competed in their first ECC Con-ference. Machuga is an Erie native and has been bowling since he can remember, mentioning that his crib was in the bowling center that his grandparents owned, Frontier Lanes.

He attended and bowled at the University of Nebraska for two years before making an amateur run before he turned pro in August 2001. He won two PBA National Tour Championships and one PBA Regional Championship. On 24 occasions, Machuga has bowled a 300 on the PBA Tour.

He was also a member of the Dallas Strikers for two years in the PBA League.Machuga continues to compete on a Professional Bowling Association Tour.But of course, bowling is not Machuga’s entire life. Another hobby he enjoys is playing golf.

“My summers are mostly working on my lawn, which has a golf green with real grass, and playing golf,” said Machuga, which explains why he started out as a golf coach.

“There’s so many rewarding things,” said Machuga about the positives of being a coach.

“I love when a student realizes they can do something that they never really thought possible. As a team, there’s nothing more fun than riding the energy and momentum from successes.” Machuga describes his favorite memory as a coach:

“I remember our first season, in the spring right before the pandemic, Haley Youker doubled in the 10th frame to win a match against one of the better teams. The excitement from the team, the joy…it was a breakthrough moment for all of us.

”The team competed in a tournament at Medaille College at the end of February where they received second place among a total of five teams. The Lakers were just 220 pins shy of Medaille and posted a total pinfall of 9,075.

Machuga said that after this tournament the team can do so much better in terms of their spare percentage.

“We are 24th in the Nation (All Divisions) in strike percentage, but we are 50th, of the top 50 teams in the country, in single pin spare percentage,” said Machuga.

The team improved as they were able to win first place at their most recent tournament at Daemen College. The Lakers were more than 600 pins ahead of second place with a total pinfall of 9,641 after winning all five matches during the tournament. The women’s team will compete in their second to last tournament of their season on March 19 and 20 in Wilmington, Delaware. The women’s bowling team is ranked 12th nationally.