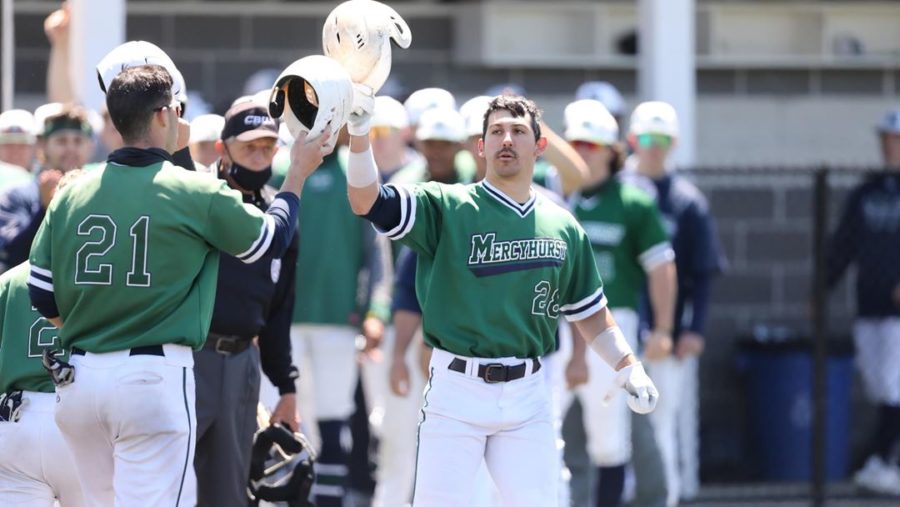 Over the past two weeks, the Mercyhurst men’s baseball team has competed in the Salem Invitational at Salem University. On March 5, they faced Alderson Broaddus where the Lakers won 9-1.

Sophomore John Susnik scored his first homerun of the season in the second inning followed by Alderson Broaddus’ scoring their only run of the night. In the bottom of the third inning, senior Troy Banks hit a SAC fly to drive in senior Casimer Sobaszek. In the bottom of the fifth, graduate student Josh Surowiec drove in sophomore Matthew Gibson with a two run homer.

In the sixth, junior Ryan Perretti scored on a pass ball to make the score 5-1 after six innings. Sophomore Luke Jackson walked to drive in Surowiec in the eighth inning.

In the bottom of the eighth, Perretti had a base clearing triple to make it 9-1 in favor of the Lakers. On March 6, they faced Wheeling University where the Lakers won 19-3. Sophomore Aiden Shepherd scored a three run homer in the second inning to kickoff the scoring for the game.

The Lakers closed out the game in the ninth inning where they scored seven runs. And then later in the day the Lakers played Salem University and won 13-3. Sobaszek opened the game with a walk and eventually scored the first run of the game on a Troy Banks double. Senior Jack Elliott then drove in Surowiec followed by Jackson driving in Banks on a SAC fly.

In the second inning, Salem scored their first run and Surowiec responded for the Lakers in the third inning with a solo homer to center field. Elliott was hit by a pitch and then Shephard hit a two run homer to make it 6-1.

In the bottom of the third inning, Salem scored their second run. In the sixth inning, Shepherd hit his third homer of the day to make it 7-2 Mercyhurst. Susnik hit a single followed by sophomore Brandon Arnold’s single. Sobaszek reached on an error to bring home Susnik and Arnold came home on an error on a pickoff attempt. Elliott scored off of a Sobaszek single to bring the Lakers lead to 10-2 in the seventh inning.

Salem responded with a run of their own in the bottom half of the seventh. In the top of the ninth, the Lakers had three more runs after senior Logan Martella-Tasick drove in two runs with a single followed by Aiden Morrison running home on a wild pitch with two outs already.

On March 10, the Lakers played Concord University and had their only loss of the invitational with a score of 3-5. The Lakers’ only loss through-out the whole invitational started when Concord scored three runs in the third period. Mercyhurst scored their first run of the game when Susnik drove in Elliott. Freshman Jacob Bazala was the pitcher in the fifth inning and had two perfect innings until he gave up a homer in the seventh inning to make it 4-1 Concord.

In the top of the eighth, Banks drove in Sobaszek after he was moved to second on a Surowiec single. Banks hit a double to bring in his seventh run of the season. In the ninth, Susnik drew a walk and advanced to second on a wild pitch. Arnold’s single forced an error that allowed Susnik to score. The Lakers comeback effort was just shy as they were still down by two runs at the end of the game.

The final game was played on March 11 against Salem University again and the Lakers were able to pull out another victory. Salem opened the scoring in the bottom of the first, but the Lakers responded with a run by freshman Chris Juchno on a balk. Elliott was able to drive in Sobaszek to tie the game at two. Banks led the third inning with a solo homer and in the fourth inning, Gibson scored his first homer of the season which also brought Sobaszek home.

Later in the fourth, the Lakers pulled off a double steal with Juchno at the plate allowing Banks to score after stealing third. Salem scored their final two runs of the game in the bottom of the fourth. Jackson started the fifth inning with a solo homer.

In the eighth inning, Surowiec scored the eighth run for the Lakers. In the top of the ninth, the Lakers built their lead even more as Gibson drove in Sobaszek and then Surowiec drove in Gibson. Banks then hit his second homer of the game to give the Lakers a seven run lead. All nine starters for Mercyhurst tallied a hit in the game.

Their next game will be against Ashland University in Ashland, Ohio on March 22 at 1 p.m.