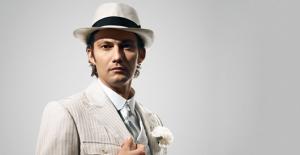 “Faust” is a tale of how bad decisions can go awry. Faust is bribed by the devil with power, glory, riches and youth.

Everyone around Faust is plagued with despair and misfortune. Marguerite, the woman Faust desires and loves, become pregnant with Faust’s child. Faust kills Marguerite’s brother Valentin, who curses his sister.

Afraid she will be damned forever, Marguerite attempts to abort her unborn baby. She is put in prison after being found guilty of infanticide; there, Marguerite becomes insane.

Faust returns to Marguerite and tries to save her. Méphistophélès plans to damn Marguerite for eternity, but in her last plea to heaven, Marguerite asks God to take her, the plan is foiled and Marguerite is saved.

The barren stage and set has been receiving quite a lot of criticism since the production opened. Most critiques have said the set and staging do not represent the true nature of “Faust.”

The chorus, costumed in laboratory coats, and the other cast members in mid-20th century garments do not represent the time period Gounod imagined while composing this opera.

Although the set design and staging may be getting bombarded with critical judgments, the cast is not.
René Pape as the devil is said to be “dangerous and charming,” by the Columbia Daily Spector.

The New York Post writes that Jonas Kaufmann again proves that he can sing any tenor role.
MSNBC stated Marina Poplavskaya “manages the transitions (of her character) with total conviction.”

When asked if she thought modern productions of classic operas discouraged regular opera audiences from attending, sophomore Tanya Coleman replied, “No, I think that contemporary productions draw in both old and new opera patrons and helps people be more aware of the arts.”

Freshman Alexa Zeremenko said, “Love is love,” when asked if she thought the scenery would impede the love story the opera is centered around.

It will be very interesting to see the turn out of this simulcast. Hopefully more people will be curious than deterred by the modernized production.