Joe the orangutan of the Erie Zoo passes away 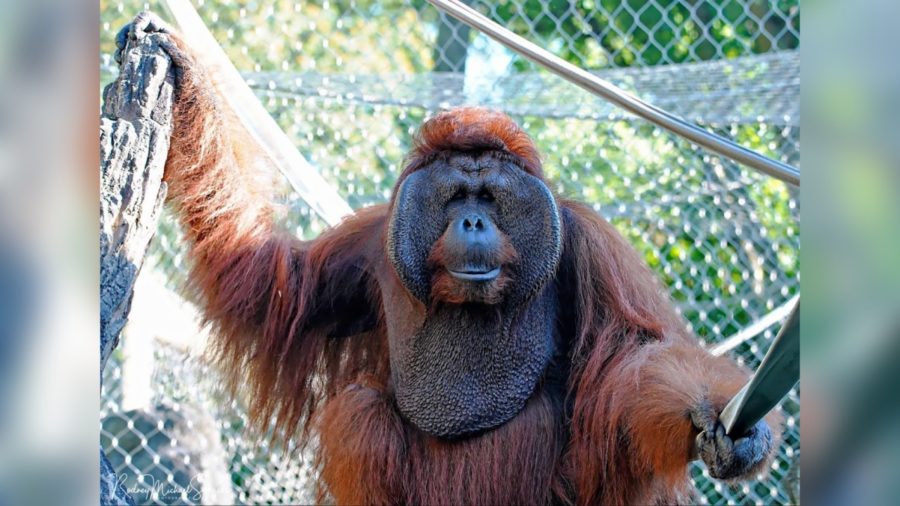 On March 6, the Erie zoo opened for the 2022 season. As visitors came to take place in opening day festivities, many noticed the Bornean orangutan family was not present in their exhibits.

The day prior, 36-year-old Bornean orangutan Joseph, known by most as simply “Joe”, fell ill. Joe’s symptoms included behavioral changes, lack of appetite, and fatigue, the Erie Zoo revealed in a news release.

A Covid-19 test was administered and came back negative, and subsequent tests did not result in a diagnosis.

Joe lived in the exhibit with his mate Dasa. The two came to the zoo together in 2002 to mate.

Despite having three offspring together, only Dasa’s and Joe’s 5-year-old offspring, Otis, lived in the Erie Zoo.

Joe was the only one to come down with the mysterious illness, but the zoo removed the entire family from the exhibit as a precaution. While the family was away, the zoo set up a table outside of the orangutan exhibit to make get-well cards for the beloved family. Joe passed away on March 19.

“This is a truly sad day for the Erie Community and we are all heartbroken over the loss of Joe,” said Roo Kojancie, COO of the Erie Zoo, in a news statement.

“Joe has been a beloved member of the Erie Zoo family since 2002. He has touched the hearts of so many visitors, volunteers, and staff over the years. His absence is going to leave a hole in our hearts. I’m proud of our exceptional veterinary and animal care teams who dedicated themselves to leaving no stone unturned in their pursuit of Joe’s health.”

Two days prior to his death, Joe went under intense testing.

“Several routine diagnostic tests were performed which did not yield enough information for a diagnosis,” the zoo said in the statement about Joe’s death.

“After extensive consultations with experts from the Association of Zoos and Aquariums’ (AZA) Orangutan Species Survival Plan and the Great Ape Heart Project, additional diagnostic evaluations under anesthesia were deemed necessary.”

Orangutans are an endangered species. According to the Orangutan Conservancy website, orangutans have a life expectancy of 35 to 40 years in their natural habitats. However, in captivity orangutans have been known to live into their late 50s.

A contributing factor in orangutans becoming an endangered species is due to the unethical production of palm oil.

“The mass production of palm oil has relied on the destruction of rainforests, which leads to climate damaging emissions, as well as loss of biodiversity, particularly for orangutans, and human rights issues” according to ethical consumer.

Despite recent efforts to reduce production and usage of palm oil, it is used in many products across the globe.

According to ethical consumer, “more than 50% of packaged supermarket products from margarine and oven chips to soaps and detergents” are made using palm oil.

It is important to consider the products you use each day and consider to switching to a brand that uses ethically sourced palm oil if it is affordable.

The Erie Zoo said that there is no rush to replace the beloved orangutan, and that the other orangutans who shared the exhibit with Joe are healthy.