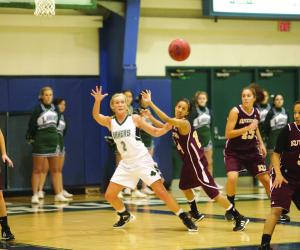 Sports Information photo: Senior Nikki Frederickson has stepped up this season, averaging nine points and six reboundsThe beginning of the 2011-2012 season was one to forget for the Mercyhurst women’s basketball team.

Their rocky start hit a low point when the team lost its fourth game in a row to start the year.

But after two victories, the team is feeling a burst of confidence and it’s beginning to show on the court.

Senior Nikki Frederickson had a career-best game to help the Lakers earn their first win. Helping the team to a 67-60 win over Kutztown, Frederickson scored a team-leading 20 points and also pulled down 11 rebounds.

“We stepped it up a lot, we had great intensity, momentum and we were aggressive,” Frederickson said. “I made a lot of rebounds along with Dana leading us in our offense and Megan Hoffman had some crucial shots. We were feeling really good overall.”

Following a 15-15 record during the 2010-11 season, the team is trying to step up its game to try to make this season one of the best.

“We were definitely off to a rough start. We easily could have won one of the first four games, but we’re progressively getting better and improving the areas that need work,” Frederickson said.

Frederickson, along with fellow senior Megan Hoffman and junior Dana Banda, will be relied on heavily to lead this year’s squad.

Last season Frederickson appeared in all 30 games and was the team’s fifth leading scorer and fourth leading rebounder.

This season so far Frederickson has started in all eight games and averages nine points and six rebounds a game, which rank third and first on the team.

“I try to be a leader on the team as much as I can, especially now that I’m a senior. I have a lot of determination and desire this year to graduate having a successful season with my team,” Frederickson said.

Following the 0-4 start, the Lakers managed to win three of the next four, for a 3-5 record overall. They are still giving it their all, practicing hard and preparing for each game.

“We have great team unity,” said Frederickson. “We are all extremely close, and we know how to talk to each other and communicate, especially on the court. Everyone is stepping it up and working hard, and we’re all hoping this year will be one to remember.”

Frederickson and the Lakers return to action Wednesday, Dec. 14, against West Virginia Wesleyan at 5:30 p.m. in the Mercyhurst Athletic Center.