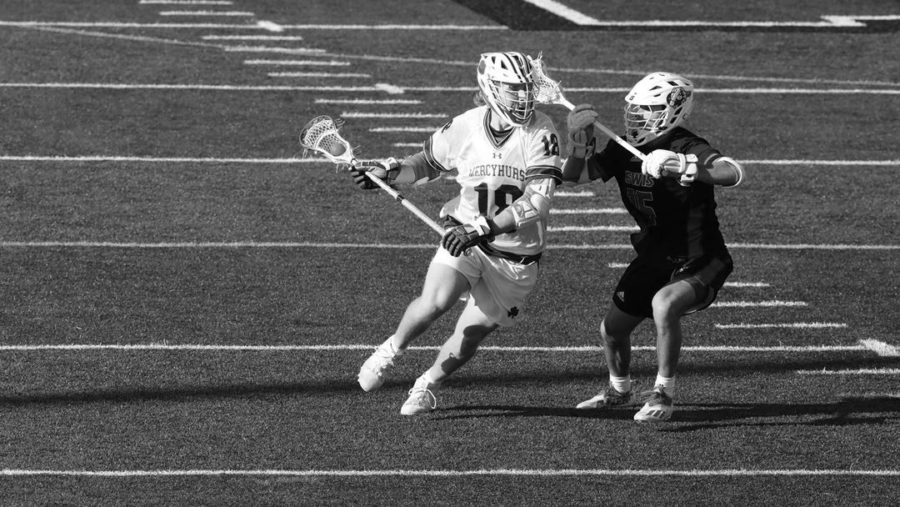 The Lakers were just coming off of a great win against Roberts Wesleyan College on April 13.

In that matchup, Mercyhurst dominated with a final score of 26-10. The 26 goals were the most Mercyhurst has scored all season and there were two players who each scored at least five goals.

Alderson Broaddus and Mercyhurst have played each other many times in the past with this being the ninth game between them. Mercyhurst first played the Battlers on April 7, 2013, and it was a victory for the Lakers with a final score of 19-5. The Lakers have gone on to win every single game against Alderson Broaddus, leading to an eight-game win streak against their GMAC rival. Would the Lakers be able to capitalize on this momentum?

The game started at 4 p.m. and shortly after, the men’s lacrosse team was out to a hot start. In the first 15 minutes of the game, Mercyhurst was able to put up eight unanswered goals on the board. The first quarter scoring was created by junior Myles Hamm, junior Bryce Johnson with two, senior Todd Redman, senior Liam Bogedain, junior Patrick Carrozi, freshman Matt Mojsej and freshman Jackson Saulpaugh.

The Lakers continued the offensive attack into the second quarter as they scored six more to go into the halftime intermission with a 14-0 lead. This offensive scoring in the second quarter was led by sophomore Casey Scott with two, freshman Antonio Rossetti with two, freshman Josh Michel and freshman Tim Weisenel. The defense naturally played extremely well in the first half to prevent the Battlers from scoring. However, the Battlers did have a bit of a breakthrough in the second half.

They were able to score their first and second goals in the third quarter. The first was at the very start of the third quarter, just over two minutes in. The second came a little before halfway into the quarter at the 7:54 mark. These two scores would be the only ones that Alderson Broaddus would be able to score against the Lakers’ strong defense. It was a relatively quiet quarter for Mercyhurst as they ended up scoring three goals in the third, making it a 17-2 lead going into the fourth quarter.

Saulpaugh scored his second goal of the day in the third, Michel also scored his second, and Rossetti scored his third.The Lakers could not be stopped as they finished off the day with five goals in the fourth quarter. These scores came from fresh-man Adam Oscarson, junior Jared Butler, Mosjej with his second, freshman Lucas Hoskin and freshman Kevin Sprague.

The final tally for the Lakers was a 22-2 win and they continued on to a eight-game win streak.