Get to know the cross country coach 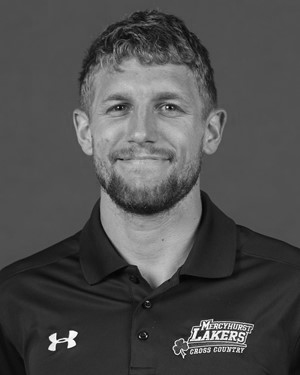 Michael Williamson has been coaching the men’s and women’s cross country teams since 2020. He has been the assistant head coach for both teams since 2014. In his time as an assistant coach, three men and four women achieved all-conference honors.Williamson talks about how he became a coach at Mercyhurst.

Williamson graduated from Mercyhurst in 2014 with a degree in Social Work. He also ran cross country for the Lakers from 2010-2013. In his last year, he was named the team captain and led the men to have the highest conference and regional finish that year. Williamson lives in Erie with his wife Rosemary. She helps coach Gannon’s cross country teams. Williamson currently works full-time at The Charter School of Excellence.

“The school district focuses on urban youth who are two or more years below grade level and support them through their Social Emotional and Academic barriers,” said Williamson.

While not working at school and coaching, Williamson teaches pro-social skills to Juvenile Probation clients, trains to stay a competitive runner, loves spending time with his wife and their dog, Biscuit, and watching Marvel and Star Wars. Williamson recalled the first time he started running.

“I have been running distance since I was 13 years old when I started doing track in 7th grade.,” Williamson said. “My homeroom teacher recommended I join the track team after always wanting to run around the track each time we went outside to walk it. After middle school track, I went out for the high school cross country team and have enjoyed running ever since.”

Coaching is a difficult job and one must really love the sport and the kids in order to be the best coach for the team. Williamson comments on his favoite part about being a coach,

“I love being the biggest fan of my student athletes. Seeing the hard work that they put in pay off and seeing them celebrate their accomplishments and successes,” Williamson said.

“I enjoy sharing my love of the sport of running with all of them and to see them appreciate and enjoy the sport more and more as they progress through the program.”

The team just took a trip to Boston for the Boston Marathon. Williamson said it was one of his favorite memories as a coach because he got to see his teams experience one of the oldest and most prestigious races in the world. Williamson is very proud of the teams so far but he would love to see them improve.

“ I am excited to see the growth of all the student athletes from this past season into next season. Both teams had individual successes this past year that they can build off of with a solid summer training season coming up to be ready to race in the fall,” said Williamson.