NBS named Chapter of the Year 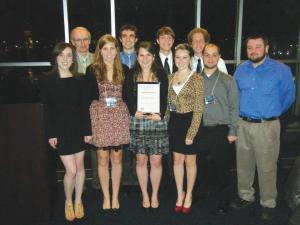 “Mercyhurst Chapter of the National Broadcasting Society has created its own direction for interpreting media,” said junior Joe Pudlick, vice president of NBS at Mercyhurst who helped organize the convention.

“We have members who are aiming more for broadcasting and those more interested in public and media relations, so our club has really taken the angle of understanding how media interacts,” Pudlick said.

Advisers of the New York and Pennsylvania chapters in attendance chose the Mercyhurst chapter for how well it planned and hosted the 2011 convention.

“I am so proud of all of the work every member of our chapter did,” said NBS President Alaina Rydzewski.
“We deserved chapter of the year, but none of us thought we would receive it because we did not submit pieces to competitions like other chapters did.”

“Our chapter planned the whole convention and pulled it off. It was something Erie, Mercyhurst and our small society could be proud of,” said junior Aaron Loncki, a club member.

“National Broadcasting Society is all about new media in today’s market. TV, radio and print media are all converging. If you’re getting into the communication field, you have to know it all.”

While NBS does offer educational opportunities for students, through conventions, speakers or practical experience, it also serves to provide networking for students.

“The National Broadcasting Society is a professional society for students who are interested in broadcasting, behind or in front of the mic or camera,” Pudlick said.

“It operates under the presumption that it’s not about what you know, but who you know when it comes to getting a job.”

“The club is characterized by people who are determined and have something they want to accomplish,” continued Pudlick.

“We have lots of available positions and are always looking for people who want to do something fun, imaginative and of high quality. We do not limit our members and try to engage everyone to participate in the way that suits them best.”

Previously the club attended several NBS conventions, including those in New York, Dallas and Los Angeles.
This year the club will attend the National Convention in New York City in celebration of the award.