Men's basketball gets most out of transfers 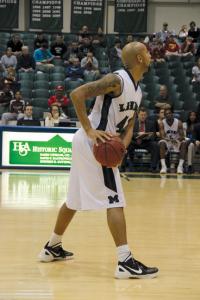 Jill Barrile photo: Senior Bill Weaver has provided a senior presence to the Lakers this season, averaging 12 points and five rebounds.“The Mercyhurst men’s basketball team annually has had a tradition of transfer players filling its rosters. Most of these transfers hail from Division I schools or junior colleges.

Five members of this year’s squad have transferred in from D-I schools in New York, Rhode Island, Virginia, Connecticut and Ohio.

This has followed suit from years past. Throughout the past three seasons, eight transfer players gone on the roster each year.

“It was a better move for me athletically and academically,” said Weaver. “Mercyhurst had an excellent computer systems program and was a better fit for employment opportunities. Basketball was also a great fit because I was becoming an addition to a winning team, and I could be a factor right away.”

Head coach Gary Manchel has seen many players transfer into his program during the last nine years. Out of the 16 All-Conference players that Mercyhurst has had, eight have been transfer players.

The past few seasons have been most affected by the transfer players.

Sophomore Matt Lee, a newcomer on the Lakers’ roster in 2011-12, transferred in this year from Bryant University in Smithfield, R.I.

“I’ve definitely felt welcomed on this team, contrary to how I felt at Bryant last year,” said Lee. “Our team here is really close.”

Since transfer players are much different than traditional freshmen because of the experience they provide on the court, the Lakers have seen immediate success.

“Transfers definitely have more experience playing at a higher level, which proves beneficial to them and their teammates,” said Lee. “True freshmen aren’t acclimated to the college basketball atmosphere, there is definitely a noticeable difference between the play of true freshmen and transfers.”

“Everyone plays an important role this year. All of us bring experience from where we have played,” said Weaver. “We have been through the ropes and played against professional caliber competition. It brings a sense of leadership to the team.”

This leadership will hopefully carry the team into PSAC-West play, which begins Wednesday. The Lakers travel to Clarion with tip-off at 7:30 p.m., followed by a home contest Saturday at 3 p.m. in the Mercyhurst Athletic Center against Slippery Rock.