Mercyhurst College, the school we all know and love, was established in 1926. A lot has changed since then, which is why Professor of History Roy Strausbaugh, Ph.D., is writing a book of the history of Mercyhurst dating from 1926 to 2000.

The idea for the book came about when Strausbaugh, who is a historian by profession, approached President Thomas Gamble, Ph.D., and asked to write a history book for the college since Mercyhurst doesn’t have one.

“The college needed a history of the place,” Strausbaugh said. 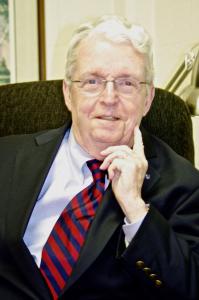 Zach Dorsch photo: Professor of history Roy Strausbaugh, Ph.D., is in the process of writing the history of Mercyhurst dating from 1926-2000. The book will be the first of its kind for Mercyhurst.

The closest thing to a history book for the school was in 1976 when Sister of Mercy Mother Eustace Taylor wrote a short celebratory history of the college for Mercyhurst’s 40th anniversary.

Strausbaugh has acquired a great amount of experience in the higher education—he has held several positions at Edinboro University, Thiel College and Mercyhurst College. Some of these positions include dean and associate vice president at Edinboro, dean at Mercyhurst and academic dean at North East.

Aside from these positions Strausbaugh has been employed at Mercyhurst for 17 years and has been here to experience a great chunk of the school’s history.

From these positions he “learned about how a university works,” Strausbaugh said.
While employed at Edinboro, Strausbaugh wrote a book documenting its history, titled “Edinboro University, an Administrative History.”

The history book for Mercyhurst explains about the Sisters of Mercy and how they founded the school. It goes into detail about the changes that occurred over the years and how the sisters were leaders who educated the students.

The book includes huge changes such as the decision and importance of going co-ed in 1969 and the impact that had on the school. It describes student life over the years and the addition of sports teams once the school became co-ed.

“I think it’s great that Dr. Strausbaugh is digging deeper into the history of our college. We have such a rich and interesting history, but unfortunately not many people know about it,” junior history major Garrett Stolz said.

A large portion of discussion in the book is on the late 1960s and 1970s and all of the changes that occurred during those years. During this time span, Mercyhurst dealt with several outside forces, and the book contains information about how the Sisters were the educators and administration up until then.

Many familiar names are mentioned in the book including Gamble; James Adovasio, Ph.D; Joe Kimball; several other faculty members and of course, the Sisters of Mercy.

Some of the major stories in the book include the story of the main gates, the introduction of the archaeology program, the building of the chapel, O’Neil’s scandal (the money issue regarding Christ the King Chapel), the creation of Mercyhurst North East (MNE) and the introduction of Division I ice hockey to Mercyhurst.

“Mercyhurst needs a book written about our rich history and tradition. Most students come here knowing very little about our past, and we really do have some interesting happenings that have occurred on campus,” junior Alicia Rossi said.

Strausbaugh collected his information in various locations. One of his biggest sources was the archives on campus. He also used sources such as the Mother House Archives, local newspaper articles, Board of Trustees minutes and materials, The Merciad, College Self Studies and reports from Middle States.
Information was also used from Larie Pintea, oral historian at Mercyhurst, who interviewed retirees from Mercyhurst.

“I think it’s great that Dr. Strausbaugh is writing a book on the history of the school. Mercyhurst has such a rich history that often gets overlooked, especially by its students,” junior history major Chelsea Morris said.
While most students find the idea of a book about Mercyhurst’s history interesting, some stressed the need to focus on the present and future of Mercyhurst.

Junior Ben Snedden said he thinks the college should be more concerned about the future rather than dwelling on the past.

The book is currently in the editing process and is expected to be completed and published in the early summer months.

The book will be revealed, Thursday, Jan. 26, in the Great Room of MNE’s Ridge Building.