“I am most definitely a feminist,” said Alice Edwards, Ph.D., chair of the World Languages and Cultures Department at Mercyhurst College.

“I view the world through the lens of my experience as a woman, believing in the fundamental equality of all people. I do believe gender matters—culturally, clearly and in other ways we don’t yet fully understand, but I don’t believe it affects our worth as humans.”

When Edwards recognized the gender imbalances happening at Mercyhurst College, she asked President Tom Gamble, Ph.D., for permission to form a committee to study the suspected imbalances and potential solutions.

The President’s Task Force on Women and Leadership was created when Edwards was appointed chair.

The task force was formed “to address concerns about the perceived imbalance between men and women in positions of academic and administrative leadership at the college,” Edwards said. 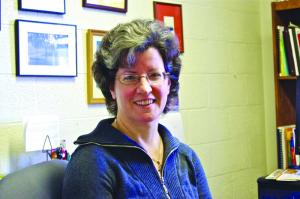 Zach Dorsch photo: Alice Edwards, Ph.D., has been at Mercyhurst for 22 years.

Gender imbalance could be considered of greater concern at Mercyhurst because Mercyhurst was traditionally an all-women’s college, and when the Board of Trustees voted in 1969 to admit men, the college began hiring more men and creating academic and athletic programs to attract more men to the college. This has had a direct effect on the status of Mercyhurst today.

The task force had three faculty members, four administrators, one trustee and Edwards, for a total of nine members, all women.

After the task force is complete, Edwards said she thinks there will still be a need for “an ombudsman for gender issues because the commitment to them will go away,” she explained.

Overall, Edwards loves Mercyhurst and what the university stands for. In fact, she has been teaching at Mercyhurst for 22 years.

When Edwards started at Mercyhurst, only a French minor and a German minor existed—no majors, and no Spanish. Now, the department is thriving, with Spanish, French, Japanese and Russian majors and a host of different minors. Mandarin Chinese is also offered. Edwards is a Spanish professor.

In addition to her work at the college, Edwards is also deeply involved in the community—she serves as a doula to women at the Cambridge Springs State Correctional Facility.

As a doula, Edwards focuses on “nonmedical, physical, emotional and educational care. We don’t catch babies, but we give them educational resources and help them with their birthing plans.”

Other resources they provide can be as simple as “getting them tea and giving them a back rub—all the things that probably the woman’s mom or friends or sister would normally do,” Edwards said.

In the 22 years Edwards has been teaching at Mercyhurst, she has built a department, but more importantly, she has fostered relationships and diversity within the college that will last a lifetime.