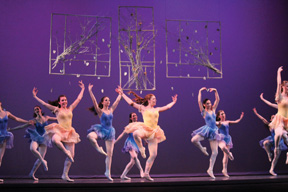 Sarah Hlusko photo: Mercyhurst dancers give their all during a performance of “Requiem for a New Day.” This weekend marked the annual collage of student choreographed masterpieces.

“Raw Edges” ran last weekend at the Mary D’Angelo Performing Arts Center (PAC) to an impressed crowd. This was the Mercyhurst Dance department’s 13th annual presentation of one of the most popular visual art events in the Erie area. “Raw Edges” is an opportunity for dance majors, in addition to a couple alumni, to showcase their abilities as choreographers and watch their creations blossom live on stage before their eyes.

With Artistic Director Tauna Hunter at the head of this production, the concert had been organized to include works of seasoned choreography students taught by Solveig and Mark Santillano, along with Hunter.

The students involved with these works have taken the senior seminar course that is not mandatory, which includes submitting a choreographed work that is completed at the free will of the student.

These students have gained an appreciation for the art of choreography and wish to go above and beyond the call of duty to produce art for the community.

“It was such an amazing experience working with every talented choreographer and dancing in well-choreographed pieces. I had such a great time performing,” said sophomore Emily Reed, when asked about her experience in this year’s “Raw Edges.”

Involved with this performance were alumni Meredith Lyons ’06 and Noelle Lelakus ’08, who both participated in “Raw Edges” concerts as performers and highly-regarded choreographers.

This particular show contained many different genres of music and collaborations with all sorts of artists, musicians and designers. 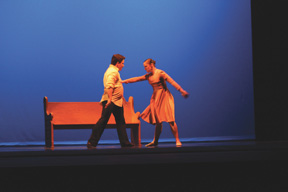 Sarah Hlusko photo: Two dancers have an argument during “Lord, Look Down.”
The “Raw Edges” concert has always been noted for its use of diverse selections, including a commissioned score by alumna Kirsten Rispin a work of one of current music composition major Kayla Nash, which was performed via recording with violin and piano.

The concert started off incredibly with the premiere piece “Hands of Time,” which was so captivating both with the movements of the dancers and the wonderful coordination of the music.

Choreography for this work was by senior Kelly Clymer, with music by The Blaze and Faib and with poetry written by senior Chrissy Mihalic.

Dancers imitated the movements of a clock with such a grace that it was mesmerizing to watch.

Featured dance senior Kristina Weimer gave a beautiful performance, captivating the audience with her every move.

Directly following was the appropriately named “Eden in Progress” with choreography by C. Noelle Partusch, which was also a premiere work.

“It’s always fantastic to not only see the hard work the dancers put into the shows, but the creativity behind each piece as well,” said sophomore Kristian Hill.

“Lord, Look Down” was the next piece to hit the stage. Choreographer Tess Sinke collaborated with Robert Von Thaden, Ph.D, and Gregory Baker to make this wonderful production possible.

This piece featured two different casts of dancers for the Friday and the Saturday-Sunday show.

The next piece, “In Time” premiered in 2011 and was dedicated to the choreographer and performer’s grandparents and sister-in-law, who all died of cancer.

Sara Lawrence-Sucato ’06 had an awe-inspiring connection with this piece.

Set to music by Alberto Iglesias and Ayub Ogada, Lawrence-Sucato poured her heart and soul out on the PAC stage to the to the delight of the audience viewing this visual masterpiece of emotion.

The last piece before intermission was certainly a treat to watch. Senior Jessica Stachelrodt choreographed the premiere of “Requiem for a New Day” to music by famous composer John Rutter.

Each of the performances for this number featured different dancers to give equal opportunities to perform.

The next three performances; “The Power Within,” “3 pieces for Violin and piano,” and “…I used to know,” which were all premieres, choreographed by Melissa Sheffield, Anastasia Welsh and Jo Alspaugh/ Noelle Lelakus, respectively, were all extraordinary displays of emotion.

The music for “3 Pieces for Violin and Piano” was composed by Nash and was performed by Samuel Rotberg, Ph.D., and Andrew Rainbow, whom are both paradigms in the profession of music.

The finale was one of the most notable pieces on the program. This arrangement was titled “Me, They, Oui” and was choreographed by Eden Mishler.

This had a definite French overtone.

The piece was set so that each performer conveyed a different emotion through miming. The range of emotions seemed to start at the most superficial with surprise and joy all the way to our deepest of emotions such as fear and love.

The piece closed with a wonderful ensemble that featured sophomore Desi Laemmerhirt and senior Juliana Franks.

This work seemed to be a beautifully thought out memorial to Jenni-Lynn Watson, a Mercyhurst dance student whose life was tragically cut short last November. This was a very emotional piece for all those who knew Watson.

“The dancers moved with a grace that is unparalleled, and I’m extremely grateful I had the opportunity to watch this display of creativity,” he said.

This display of emotion and expression on stage rivals that of professional performers that don’t also have a college schedule or social obligations to contend with. Looks like the Mercyhurst Dancers one-upped themselves once again. I will be greatly anticipating the selection for next year.