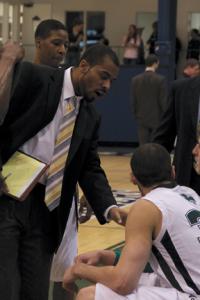 Jill Barrile photo: Graduate assistant Mike Allen brings Div. I and professional basketball experience to the staff of coach Gary Manchel.In college, professors are always talking about getting professional experience and working your way up the ladder. In athletics, playing professionally goes a long way.

Mercyhurst men’s basketball graduate assistant Mike Allen has brought his experience and talent to Erie to aid the team in a successful campaign for the 2011-12 season.

At OU, Allen made an immediate impact with the Bobcats, playing in all but one game during his junior season and started 29. He finished the year with 142 assists, ranking first in the Mid-American Conference (MAC). As a senior, Allen led the MAC in assists with 4.31 per game, and he also led the league in assist-to-turnover ratio with 2.26 per game.

After college, Allen went on to a professional career in Germany where he played for two years. During the 2009-10 season, Allen played in 29 games, averaging 5 points per game in 15 minutes of action.

Now at Mercyhurst, Allen is a member of the Organizational Leadership graduate program.

“This was a great fit for me. I was highly attracted to coach Manchel and his successful program,” said Allen.

Allen notes his professional career for preparing him for this transition.

“Most definitely my professional career gave me exposure to a lot of different aspects of the game,” said Allen. “I attained different learning techniques, and I was able to take a different approach to the game.

Perhaps the biggest change for Allen has been the transition from the court to the sidelines. The inability to control the game has been a difficult adjustment. Even so, he has found great joy in seeing players develop and ultimately coaching players to win.

“It’s different,” said Allen. “The game is out of your control on the sidelines. After a tough loss you can come out the next game with fire to win.”

“I enjoy Mercyhurst, especially the smaller campus, the 1-on-1 attention in the classroom and I have been able to learn more coaching styles and techniques,” Allen said.

Allen and the rest of the Lakers are in action against Clarion, Wednesday Feb. 8, at 7:30 p.m. in the Mercyhurst Athletic Center.