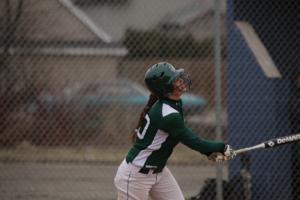 Sports Information photo: Senior Samantha Eimers’ high performance is key for Mercyhurst to have a successful year. She leads the team in seven offensive categories.Momentum comes in a variety of forms.

The 2012 Mercyhurst University softball team has found its momentum in the form of being ranked No. 1 in the Pennsylvania State Athletic Conference (PSAC) West preseason poll. That momentum has propelled them during the beginning of their season.

Redig, a senior, also returns this year as an integral part of the team’s success. Batting in 29 runs, Redig spent 42 games at second base with a .321 batting average recording 44 hits including six homers, three triples and eight doubles.

“All of our freshmen came in and stepped up to the plate,” said Eimers. “They each bring a lot to the table and have filled different starting roles.”

“Shaina Bunker has been utilized as a powerful hitter, and Lauren Rossi is a great slapper, something that we didn’t have in the past,” Redig said.

Both players noted the success of the 2011 campaign as providing momentum into the 2012 season.

“Since we were picked as No. 1 in the PSAC West during the preseason, we want to live up to that expectation and let everyone know we deserve it,” Redig said.

The Lakers have started the year with a record of 13-12 after trips to Florida, North Carolina and West Virginia. With big wins over St. Andrews University, West Liberty University and Davis & Elkins University, the Lakers are playing well.

Eimers thinks the team will continue to be successful with the increasing ability to bounce back from mistakes and play through errors as a team with a continuing positive attitude.

Redig noted the toughest competition in the PSAC West as California University of Pa. The Lakers lost to the Vulcans in their first meeting of 2011 and then went on to split a pair in their second meeting.

The Lakers open their PSAC campaign this Friday at 2:30 p.m. at Edinboro. On Saturday the Lakers will have their home-opener vs. Clarion at 1 p.m.