Family lineage is a common theme in athletics. Generally it refers to athletes, but in some cases it can refer to play-by-play announcers or writers.

For the Leisering family it started in 1986 when John Leisering began his first full-time position with Mercyhurst University as the director of athletics. As the director, John oversaw the addition of numerous sports teams and was able to watch as Mercyhurst grew.

Sports Information photo: John Leisering
In 1988, after the men’s hockey program became a varsity sport, John hired Coach Rick Gotkin to run the team. With that hiring, John also added another Leisering to the Mercyhurst family.

“I had known Rick, and the position of stick boy was open and asked if Dave could do it,” John Leisering said.

Dave Leisering was nine years old when he began working with the men’s hockey team. 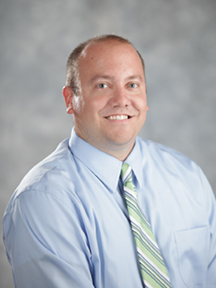 Sports Information photo: Dave Leisering
“I was around nine, and I got to sit on the end of the bench and wore a helmet during games,” said Dave Leisering. “Eventually I got promoted to door opener on the bench.”

Dave saw his responsibilities increase as he helped sell programs at football games and served as ball boy for the basketball and soccer teams.

With John at the helm, Dave worked numerous positions as he grew up. Eventually, Dave began doing play-by-play announcing with John. Dave helped his dad by doing the color commentary.

“I remember when I was 13, my dad and I were doing a hockey game together against Brockport State and we were pounding them,” said Dave. “My dad left before the third period, and I did the whole period by myself, and I loved it.”

After serving as the director of athletics from 1986-89, John worked for the communication department and campus radio station and became head of Sports Information in 1997.

Dave went on to earn his bachelor’s degree in computer systems from Mercyhurst in 2001. During his four years, Dave was a student-assistant under John.

“I learned a lot from my dad, but it was hard balancing classes and going to almost every game on campus,” Dave said.

Dave even worked full time during his junior year.

“There are a number of people that were assistants during my time that I think I helped,” said John. “I am very proud of them.”

Dave left Erie for a few years after graduating. He headed the Sports Information Department (SID) for the University of Findlay in Ohio from 2001-03 and worked for Vertmarkets in Erie from 2003-09. But he could not stay away from Mercyhurst.

Dave became the director of the Mercyhurst Ice Center when John retired in 2009, but John remains heavily involved in Mercyhurst athletics.

“I try to help out where I can,” said John. “It’s been a tremendous experience for me.”

Helping out has been John’s motto since retirement. He is always willing to help work the P.A. or do play-by-play for Mercyhurst games.

Dave and John both have very fond memories of working together at Mercyhurst.

“This job has given David and me tremendous opportunities to travel thanks to the success of these teams,” John said.

But Mercyhurst athletics has done more than bring John and Dave together.

“I remember one hockey game when my wife was selling tickets, my daughter was in the press box, Dave was behind me doing play-by-play and I was doing the public address,” said John. “It’s not often you get to work with your family, and it’s been very special.”

John’s wife has been working at sporting events for the last 10 years. She sells tickets and programs at hockey and will help wherever else is needed.

This past season Dave had to relinquish his play-by-play duties when he took over John’s old position, director of athletics communication.

“Sucks,” Dave said with a grin. “But seriously, I just try to do the best that I can. My dad was the best, but I can only do the best I can and hope it’s appreciated.”

Overall, Dave is thankful to have his dad here to help whenever he has questions or concerns.

“This is my first SID job since ’03, and a lot has changed, so it’s very nice to know my dad is around,” said Dave. “It’s comforting.”

“In Sports Information, you try to be fair, respectful and professional to everyone,” John said.

Even though John is retired and Dave has a demanding position, the two are still able to work closely together.

“We still get to call games together every once in a while,” said Dave. “But that’s certainly something I would like to get back into.”

The Leisering family has strong ties to Mercyhurst athletics, and those aren’t going to break anytime soon.