Mercyhurst’s Model International Organization team worked hard to walk away with three individual awards and an honorable mention in its third year of participation in this competition. 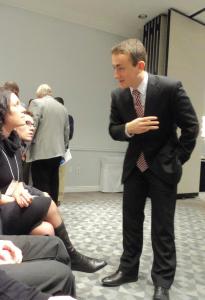 Contributed photo: Junior Lucas Sageot talks to Lena Surzhko-Harned, Ph.D., the adviser for the group that attended the Model NATO conference from February 16-19.

Junior Caitlin Handerhan won the Outstanding Partner Nation Award as the Ukrainian delegate in the Euro-Atlantic Partnership Council and junior Lucas Sageot won Outstanding Delegations in Committee Award and Committee Leadership Award as the Portuguese delegate in the North Atlantic Council (NAC). The Mercyhurst team also received an honorable mention for its overall representation of Portugal.

“Spending three days competing at such a high level was very rewarding in and of itself,” said Handerhan. “The fact that both Lucas Sageot and I were honored with an award for our performances was humbling.”

Ten students attended the event along with adviser Lena Surzhko-Harned, Ph.D. Mercyhurst represented Portugal in five committees and Ukraine in one committee.

“As a team, they had a great dynamic and worked well together,” said Surzhko-Harned. “Their research and diligence paid off.”

The conference provides an opportunity for students to gain hands-on experience within areas such as foreign policy, security, diplomatic action, military action and political and social issues. Students learn the workings of NATO and how nations collaborate in order to solve crises and other various problems.

Handerhan explained her experience as a student representing Ukraine in this competition.

“Representing Ukraine on the Euro-Atlantic Partnership Council was both fun and challenging due to the fact that I had both European and Russian interests to contend with, which required some diplomacy,” she said.

Sageot had his own challenges when it came to representing Portugal.

“Representing Portugal in NAC was not easy because it isn’t a powerhouse,” he said, “but diplomacy and hard work paid off.”

“After three years (on the team), Lucas and Caitlin have shown a great deal of growth,” said Surzhko-Harned, “and the awards are a recognition of their hard work.”

“We always have a strong performance at this conference,” said Handerhan, “but the fact that we not only won two individual awards but also brought home strong performances across the board is a testament to the talent and depth we have on the team this year.”

“The students’ performance is a testament to the quality of the student body we have here and the university at large.”