Students woke up to the sounds of St. Patrick’s Day festivities on Mercyhurst campus Saturday, March 17.

For many, the day began with kegs and eggs at local bars and then continued in the form of a campus-wide party in front of the townhouses on Lewis Avenue.

Grills, inflatable pools, furniture and yard games could be seen scattered throughout the mass of 300-plus students all dressed in green. 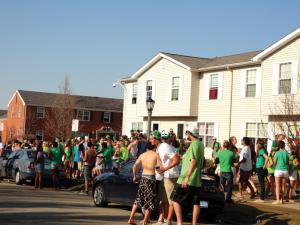 Mercyhurst faculty and staff, such as Mercyhurst Police and Safety and Vice President for Student Life Gerard Tobin, Ph.D., were close by to observe the students’ party.

The celebration even caught the attention of local authorities. While Mercyhurst Police were unable to block off Lewis Avenue, the Erie Police Department (EPD) blocked off the street for part of the afternoon for the safety of the students.

While the party attracted the community’s attention, the students are being thanked for their respect and cooperation.

Police and Safety, along with the help of Erie Police, asked the students to end the party at about 10 p.m. in order to be respectful to the campus community and its neighbors.

Campus Chief of Police Robert Kuhn explained they were surprised to see that everyone did not only disperse, but also started to clean.

Residents of the Lewis Townhouses grabbed shovels and scooped up the trash. By the next day, Kuhn found a clean Lewis Avenue.

“I must admit I am impressed with the students’ behavior and maturity, and I thought it would be nice to let them know that,” said Kuhn. “Too often students’ actions are only brought to light when they have done something wrong.”

Kuhn continued to say that all students Police and Safety had contact with were polite and obedient.

Tobin was pleased with the students’ responsible behavior as well.

“I’m really grateful that students certainly seem to have enjoyed themselves, and I’m most grateful that there were no reports of anyone getting hurt,” said Tobin. “There was a spontaneity to it all that was festive, and people seemed to manage themselves mostly respectfully and cooperated.”

Tobin did want to clarify the university’s position on the party.

“I’m going to assume there was a lot of underage drinking, but the college is not in a place we can condone that,” he said. “Our main concern is for everyone’s safety.”

Read a letter from Tobin to the students here.