The 2012 Project came to Mercyhurst University and brought awareness to the idea that women need to start claiming positions and opportunities in Congress and state legislatures.

On Wednesday, March 21, former U.S. Congresswoman Kathy Dahlkemper brought the 2012 Project to campus for a panel discussion hosted by the Mercyhurst Center for Applied Politics (MCAP).

MCAP is taking part in the project’s mission by encouraging people to consider a career in public life by teaching the art and craft of practical politics. 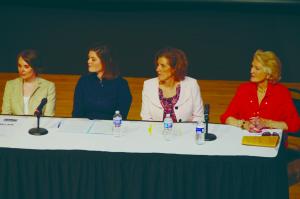 Zach Dorsch photo: Dana Brown, Courtney Sullivan, Kathy Dahlkemper and Denise Robison were the panelists for The 2012 Project Discussion at Mercyhurst on March 21.

“The Mercyhurst Center for Applied Politics is excited about the opportunity to work in partnership with MEOW (Mercyhurst Equality of Women) to bring Project 2012 to campus,” said Brian Ripley, Ph.D., professor of political science. “Politics can be a powerful force for positive social change if more people from across the political spectrum get involved.”

The 2012 Project is a national, non-partisan campaign of the Center for American Women and Politics working to increase the number of women in office.

During her presentation, Dahlkemper said, “Women leaders are not better than male leaders, but our country is better served with a more equal representation of both genders in positions of political leadership.”

Despite women making up 51 percent of the U.S. population, only 17 percent of Congress is comprised of women.

“The 2012 Project was eye opening because even now there is prejudice against women in roles of government. For a country where women make up more than half the population, the representation we have doesn’t show,” junior Daksha Cordova said.

In fact, the U.S. ranks 71st for women representation in office, behind countries like South Africa, China and Rwanda.

“I was skeptical of the panel at first, especially since I have no interest in running for political office in the near future,” senior Michelle Tatavosian said.

“However, the panel was surprisingly inspirational. The biggest takeaway for me was the quote from Kathy Dahlkemper regarding the presence of women in the political realm, noting that ‘it’s not that women are better than men, but together (in office), our country is a better, diverse representation.”

Other panelists on the board included Dana Brown, executive director of the Pennsylvania Center for Women and Politics at Chatham University, Denise Robison, former deputy secretary of the Pennsylvania Department of Aging and Courtney Sullivan, a Mercyhurst graduate student.

According to The 2012 Project, research shows that women will have more success in obtaining political seats now. It also shows that voting patterns in presidential years tends to increase female candidates.

The panel shared that many women do not obtain these positions because of institutional barriers, cultural barriers and the fact that women are simply not running. When women do run, they seem to win at the same rates and no biases appear to be found.

“It’s not a feminist issue as some would assume; it’s about gender diversity,” Cordova said.

Women are making advances in many other fields, but when it comes to politics, they come up short for holding positions.